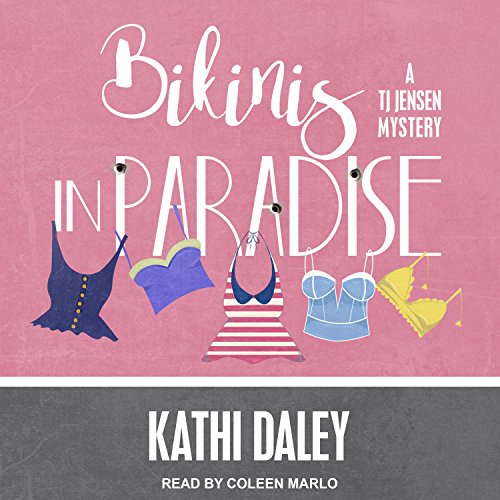 By: Kathi Daley
Narrated by: Coleen Marlo
Try for £0.00

When the Tropical Tan Corporation descends on Maggie's Hideaway, the lakeside resort where TJ Jensen lives, she must juggle a bikini contest, a BBQ cook-off, a missing model, and a dead chaperone while her father is out of town. Lead Deputy Dylan Caine is on vacation while his sister is visiting, leaving Assistant Deputy Roy Fisher in charge. When Roy asks TJ for her help, they find there may be more going on than anyone realized. With Kyle and Jenna's help, they dig into the lives of those involved, only to find a mystery more complex than anything they could ever have imagined.

What listeners say about Bikinis in Paradise

This book was really good , all the characters were great especially TJ, this book is full of mystery and who done it. I really enjoyed it.

A thriller as much as a mystery

Beyond a possible murder, a mysterious disappearance, a sinister commune, and family secrets populate this book as TJ tries to unravel it all as well as dealing with her romantic life.

Kathi Daley has written another winner in the T. J. Jenson Mystery Series. It’s full of all the fun and adventure with a little mystery thrown in to it. I highly recommend this boo / audiobook to cozy mystery fans.

A Missing model and dead chaperone

We return to Serenity, in the mountains near Reno, in Bikinis in Paradise by Kathi Daley, where Maggie’s Hideaway, the resort owned and managed for several generations by the family of TJ Jensen is hosting a bikini contest for the Tropical Tan Corporation. But when the bus arrives from the airport, it is missing two people. One of the 25 models got off the bus but didn’t make it in the walk to the Hideaway. Further, one of the organizers and chaperones of the contest failed to make the bus at the airport. Hearing that the model may have been spotted heading towards a cove, TJ goes there to check it out, only to find not the model, but the chaperone dead and tied to a sunken anchor.

Because Dylan, the detective, is on vacation, Roy, the rookie, is now left in charge, since the sheriff is known for finding excuses to avoid work. And Roy feels in over his head, so he asks TJ to help him out, since she solved the previous two murders. She involves her team of local citizens whom she has worked with before in helping her check things out. This takes them deep until the world of the contestants and employees, including hints that the man in charge of the contest was, or at least had been, having an affair with the dead chaperone. And the missing model comes from a nearby community, where TJ finds more and more disturbing features.

This book was cleverly written with a lot to enjoy of it. One thing that did get tricky is that there are so many characters in the book that it is hard to keep them straight. But usually the context helps to figure out which person each character is. Otherwise, I really appreciated the book. Despite my confusion over some characters, I liked many of the major characters, especially TJ’s little half-sisters, Amber and Gracie, of whom TJ has custody

One might think that the setting of a bikini contest could be a rather chauvinist book. But actually, the key characters we get to know from the contest are using the contest because the winner gets her college paid for, and the missing woman, as well as her closest friend, want to get college degrees and then go to medical school. The contest is a means to the goal of going to college. Yes, the organizer has been sleeping his way through the contestants. But the general message of the book is one of empowerment to women.

I enjoyed the narration of Colleen Marlo. She helps to bring the village of Serenity to life, and her performance of the girls really makes them seem realistic.

I do really enjoy this series and recommend it for anyone. I give the book five stars.