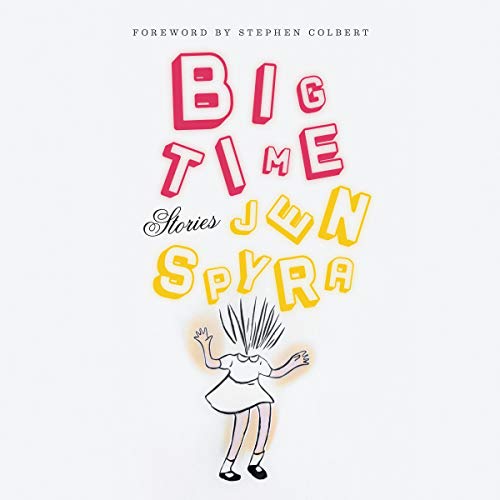 “Jen Spyra’s stories are shocking, silly, smart, and absurdly funny. Underline both those words, I don’t care how much it costs!” (Tina Fey)

A bride so desperate to get in shape for her wedding that she enrolls in a new kind of workout program that promises the moon but costs more than she bargained for. A snowman who, on the wish of a child, comes to life in a decidedly less savory way than in the childhood classic. And in the title story, a time-hopping 1940s starlet tries to claw her way to the top in modern-day Hollywood, despite being ridiculously unwoke.

In this uproarious, addictive debut, Jen Spyra takes a culture that seems almost beyond parody and holds it up to a funhouse mirror, immersing the listener in a world of prehistoric influencers, woodland creatures plagued by millennial neuroses, and an all-out birthday bash determined to be the most lavish celebration of all time, by any means necessary.

Welcome, brave soul, to the world of Jen Spyra.

“This absurdist genre-mash romp of a story collection dials its modern subjects...up to 11, and then blows up the amp.” (Vanity Fair)

“Spyra goes beyond the parody as she cleverly takes on topics from Hollywood and woke culture to white women, the wedding industrial complex and influencer culture.” (The Hollywood Reporter)

What listeners say about Big Time

Loved this collection of short stories! Each story is an absurd but smart lens to look at pop culture through. Each reader’s performance was so good and perfect for the story they told. And as over the top silly as the stories get, you find yourself surprised to be invested in the characters you found ridiculous seconds ago. The variety of stories made it feel fresh the whole way through but the stories also felt like they belonged. It’s rare for short story collections to have a thread that is the right balance of strong and subtle. Totally nailed it. Fun, enjoyable, and thought-provoking read.

I’m amazed this book isn’t getting more press. The stories are all so unique and funny and intense and actually make you think. The voice acting is also superb. I’ve recommended it to everyone who will listen.

Wild ride. Loved the last story best of all. Lots of treasures in there.

Funny. Raunchy. Prescient. The final story is amazing and worth the price of the book. Will look for other stories by Jen. Her writing is great because even though one might have and good idea of how the story will end, it is impossible to know what twists and turns she will take readers on to get there.

The author's narration as Ruby Red is worth the price of admission alone. Strongly recommend!

This book is like music to me in any medium!

I love it! It feels like my dreams while I was cosplaying Han Solo frozen in carbonite! Thank you Jen Spyra for writing this book! Thank you so much!!!

Before one says, ‘Matthew Reginald Crawley, I’m going to wash your mouth out with a bar of soap!’, say these stories have a droll pathos combined with insight and wit. A lot of kids use salty language behind their parents’ backs......

A guilty pleasure only because of the language and some situations, but a pleasure nonetheless.

This book is so funny that after reading it with my ears, I’m also going to read it with my eyes!

Absurd, hilarious, and totally committed to its raunch, Big Time gave me more belly laughs than anything I've read recently.

While these stories are at first hilarious and absurd, with multiple laugh out loud and cringeworthy moments, they are also curiously inspiring. Some of the recurring themes actually feel relatable in their extreme, some of the characters, in their idiotic and piteous situations, are paradoxically heroes. What is life if not a vacation gone wrong where can only survive by maiming or enslaving ourselves and others? What is there to live for if not delicious cupcakes? In its ridiculousness, these stories provide a safe approach to some of the most sensitive aspects of the human condition. Loved the vocal performances, the various acts were the icing on the top of this cake, except so sweet it hurts your teeth.