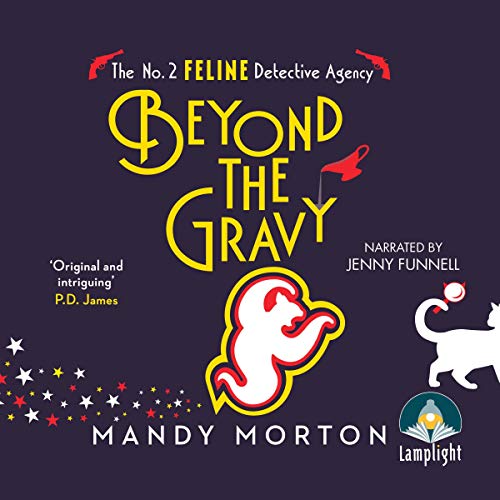 By: Mandy Morton
Narrated by: Jenny Funnell
Try for £0.00

Another instalment in the hilarious No. 2 Feline Detective Agency series, which will appeal to fans of crime fiction and of criminal cats.

The town's psychic cat, Irene Peggledrip, is being visited by a band of malevolent spirits who all claim to be murderers. The stage is set for Hettie and Tilly to solve an old murder mystery, where all the cats involved appear to be dead. Will our feline sleuths finally lay the ghosts to rest?

And will the moving claw give up its secrets before the gravy congeals?

Join Hettie and Tilly for another spirited adventure.

“The world that Morton has created is irresistible.” (Publishers Weekly)

What listeners say about Beyond the Gravy

I’m a long time fan of the series, but this was my first audiobook. Thoroughly enjoyed the characters brought to life. Mandy Morton has created a unique world that I enjoy revisiting time and time again.

Once again you have produced a beautiful, clever, exisit masterpiece. My husband and I adore your books and listen most nights along with our 5 cats on our bed before sleep. Keep up your books you are one of the best authors we have found. May we also add your narrator jenny is also a clever, multi talented narrator and you could not have chosen better to narrate your masterpieces. Absolutely the best. love Celia and Chris Parker (Cumbria)