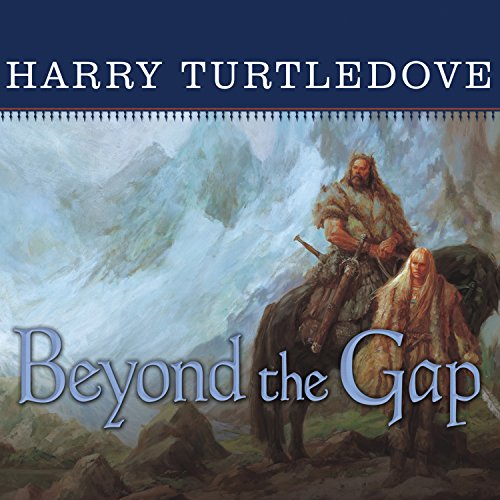 Count Hamnet Thyssen is a minor noble of the drowsy old Raumsdalian Empire. Its capital city, Nidaros, began as a mammoth hunters camp at the edge of the great Glacier. But that was centuries ago, and as everyone knows, its the nature of the great Glacier to withdraw a few feet every year. Now Nidaros is an old and many-spired city. And though they still feel the breath of the great Glacier in every winter's winds, the ice cap itself has retreated beyond the horizon.

Trasamund, a clan chief of the mammoth-herding Bizogots, the next tribe north, has come to town with strange news. A narrow gap has opened in what they'd always thought was an endless and impregnable wall of ice. The great Glacier does not go on forever, and on its other side are new lands, new animals, and possibly new people. Ancient legend says that on the other side is the Golden Shrine, put there by the gods to guard the people of their world.

Now, perhaps, the road to the legendary Golden Shrine is open. Who could resist the urge to go see? For Count Hamnet and his several companions, the glacier has always been the boundary of the world. Now they'll be traveling beyond it into a world that's bigger than anyone knew. Adventures will surely be had.

What listeners say about Beyond the Gap

really enjoyed this, I didn't think I was going to like the characters to begin with but they grew on me until I was seriously involved by chapter three. It's beautifully written and read (once you get used to some of the pronunciations). The story has a good pace and as usual Mr Turtledove has really thought it through thoroughly. Recommended to anyone living prehistory fiction. I went on to buy the second in the series.

This is a poor mans Conan the Warrior without the action. I guess the writer got as tired of this story as I did because he did not end it he just quit writing. I gave it two stars because I finished it and must save one star reviews for books I cannot finish.

So I listened, and kept wondering when the climax was going to occur. Thirteen hours into the story, after the main characters travelled and were bitten by insects and stayed cold, got dirty and ate raw meat, etc., etc. the author was finally going to get into it, the thing that every story has, a climax. Then you hear "this is audible, we hope you've enjoyed this program." Whoa...wha...wha...WHAT? Where is the story? It was pleasantly written, the concept of Visegoths and ancient empires was alright, but that is really all it was, a good concept, not a good novel. There was no real story in this lengthy novel.

Just One Clich? After Another!

For those above drinking age – sit down with over a gallon of whatever drink you like (preferably watered down as you might poison yourself otherwise), and then drink a shot for every time:
1) A character shivers but “NOT because of the cold” (or ice, or the glacier, or any reference to cold).
2) A character shoots a “darting glance”, “a look that could wither the strongest man”, or any other clich? involving glaring angrily at another person.
3) A character complains about insect bites or scratches.

That is all this book is good for. It also can inspire timid writers to see just how mediocre a writer can be and still get published. I finished it only out of a stubborn desire to get my money’s worth of entertainment. Once I made my peace with its bad writing and read it as a comedy, I was able to finish it. Even the narrator sounds like he doesn’t take the novel seriously. I certainly will never read any more from this writer. And I humbly beg you to not do so either. Unless you are of drinking age and want to get thoroughly drunk with the above mentioned drinking game.

Interesting Enough, But I'm Not That Impressed

The premise of this book is very interesting. An alternative history meeting of advanced ice-age cultures separated by an expansive glacier which has thinned enough to allow passage. The story revolves around an expedition through the glacier and the first contact between the two cultures.

The story has many problems. The action moves along at a snail's pace - in fact there's not really much action to talk about. There's very little in the way of character development, and the dialog is usually awkward.

That's a shame, of course, because most of the story revolves around the dialog. Much of the dialog has to do with cultural comparisons between the Raumsdalian Empire, different tribes of Bizogot barbarians, and the "Rulers", which is the new empire beyond the gap.

All of the cultural comparisons are actually interesting to listen to, but it's really part of what makes the dialog so strange and unnatural. You've got a bunch of stalwart adventurers on a quest and all they seem to want to do is ruminate on the differences between their cultures. Can't they talk about anything else? You can bet that people from actual historic cultures didn't go on and on about this kind of thing.

And I found the whole drama revolving around the protagonists ex-wife to be uninspired and dragged out a little too much. I get it, she's an unpleasant and unfaithful manipulator. Other than that, she doesn't play a significant part in the story. She adds a little to Hamnet's characterization - but it all amounts to a really poor attempt at character development.

In spite of all the book's faults, though, I don't regret buying it. The cultural comparisons are interesting, even if they make for unrealistic dialog. And the talk of ice-age creatures and situations involving magic were very interesting as well.

Overall, it's not a great book, but not a complete waste of time either. If you can get this book on sale, then I'd say it's worth the price.

This is not one of Harry's better stories. He uses almost all of the book to build his characters, set his plot, hopefully get all of the soap opera out of his system, & have everything ready for the next book. The last 15 minutes has some action & then stops. I gave the story 3 stars because Harry has produced great stories in the past based mainly on intrigue, but so far there are no hidden plots or valed threats. It teadiously plodes along for 14 hours and 46 minutes, has a scuffle between the three tusk clan and the rulers, then ends in a soap opera of "what do we do next?".
I am not sure if I want to get book 2.

Bought this because it was the first in the series and had seen "Breath of God" (2nd or 3rd book in the series) hyped all over the place, so thought I would give it a try. It seems as though it's written for tweens, couldn't even get through Part 1.

Boring with little action and no direction

Story surrounds the main character and his feelings since his wife left him. Drones on and on about his wants and tries to put a action plot in the middle but falls very short. If you like alot of description of characters thoughts and feelings with little action or plot then this is for you. Otherwise look elsewhere.

I got this title for free as a sign-up promotion. I was ambivalent, never having listened to a book before. I admit it. The experience was good, even though it takes far longer to listen to a book than it does to read it.

But I can do housework or work in my wood shop while listening.

And Turtledove's book is not good, it's great. I've enjoyed for years his alternate history writing, and this is a wonderful change of pace.

The characters are very believable, only very occasionally going over the top just a bit, but rapidly coming back. The plot is straightforward, without twists and turns, again a departure from much of what Turtledove writes. I'm going to buy the second book and pray for a third.