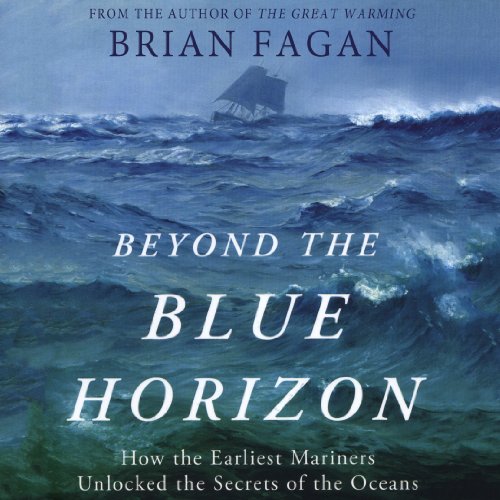 Beyond the Blue Horizon

In Beyond the Blue Horizon, best-selling science historian Brian Fagan tackles his richest topic yet: the enduring mystery of the oceans, the planet’s most forbidding terrain. This is not a tale of Columbus or Hudson, but of much earlier mariners. From the moment when ancient Polynesians first dared to sail beyond the horizon, Fagan vividly explains how our mastery of the oceans has changed history, even before history was written.

Beyond the Blue Horizon delves into the very beginnings of humanity’s long and intimate relationship with the sea. It willl enthrall listeners who enjoyed Longitude, Simon Winchester’s Atlantic, or in its scope and its insightful linking of technology and culture, Guns, Germs, and Steel. What drove humans to risk their lives on open water? How did early sailors unlock the secrets of winds, tides, and the stars they steered by? What were the earliest ocean crossings like?

With compelling detail, Brian Fagan reveals how seafaring evolved so that the vast realms of the sea gods were transformed from barriers into highways that hummed with commerce. Indeed, for most of human history, oceans have been the most vital connectors of far-flung societies. From bamboo rafts in the Java Sea to the caravels of the Age of Discovery, from Easter Island to Crete, Brian Fagan crafts a captivating narrative of humanity’s urge to seek out distant shores, of the daring men and women who did so, and of the mark they have left on civilization.

What listeners say about Beyond the Blue Horizon