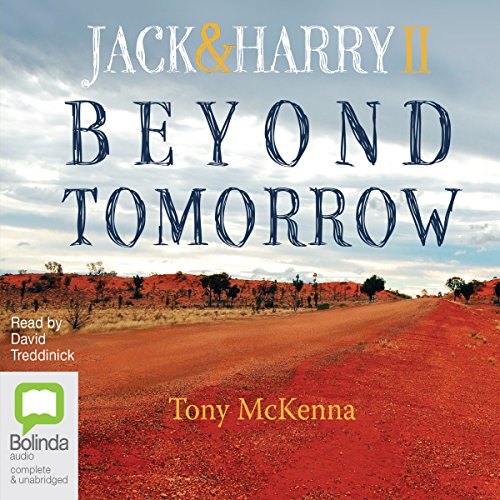 Yearning for what they’d left behind and disillusioned by city living, Jack Ferguson and Harry Turner leave Perth to return to the rough opal-mining environment of Coober Pedy, on the edge of the Stuart Ranges in South Australia.

They discover, however, that all is not as idyllic as they remembered. They face harsh conditions, personal trials and a lack of funds. But determination, hard work and a little luck see them begin to establish themselves...until circumstances deal a shattering blow that forces them to consider life’s priorities.

Weighing up their options, they decide to leave Coober Pedy, and, with nothing more than a vague plan and the support of the vivacious and spirited Naomi Wilson, they saddle up their stock horses and head for the Northern Territory - and an uncertain future. But then a chance discovery presents them with an opportunity that will change the course of their lives for ever.

Beyond Tomorrow, the sequel to the Tony McKenna's best-selling Jack and Harry, is a heartwarming journey of courage and daring packed with outback adventure, colourful characters, surprises, romance, drama and humour - a truly Australian novel.

Well written, well read. age appropriate for kids as well as interesting and engaging for adults