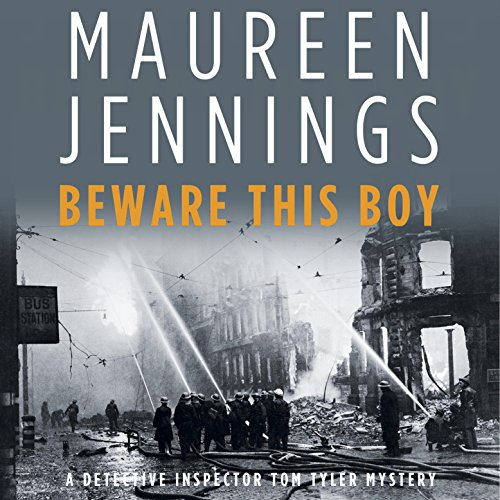 November, 1940. Tom Tyler, Detective Inspector of the small Shropshire town of Whitchurch, is a troubled man. The preceding summer had been a dark one for Britain, and even darker for Tom's own family and personal life. So he jumps at the opportunity to help out in the nearby city of Birmingham, where an explosion in a munitions factory has killed or badly injured several of the young women who have taken on dangerous work in support of the war effort.

At first, it seems more than likely the explosion was an accident, and Tom has only been called in because the forces are stretched thin. But as he talks to the employees of the factory, inner divisions - between the owner and his employees, between unionists and workers who fear communist infiltration - begin to appear. Put that together with an AWOL young soldier who unwittingly puts all those he loves at risk and a charming American documentary filmmaker who may be much more than he seems, and you have a pause-register novel that bears all the hallmarks of Maureen Jennings' extraordinary talent: a multi-faceted mystery, vivid characters, snappy dialogue, and a pitch-perfect sense of the era of the Blitz, when the English were pushed to their limits and responded with a courage and resilience that still inspires.

What listeners say about Beware This Boy

Where do I start?

The story itself is fine and the characters are interesting (although the trope of men in unhappy marriages unable to keep it in their trousers is becoming too prevalent). What struck me about the book was that although it’s set in Britain it’s author probably isn’t and some phrasing jarred. Who the hell ever called it a ‘mail slot’?
But no, what destroyed it for me was the narrator. There are a lot of accents in the book and he was pretty much terrible at all of them! The book is set in Birmingham and people are described as having a strong brummie accent. Most of these sounded like Dick Van Dyke cockneys with a few straying towards Merseyside 🤦🏼‍♀️

The mastery that is Ms Jennings

I would recommend this book to everyone

I enjoy Ms Jennings' writing , this is another great story, set in an era that is of interest to many...what is not to like?

Great story shame about the accents

This is a well constructed story, telling a different side of the war effort during WW2. The characters are interesting, the plot well thought out and kept me listening despite the truly terrible accents ascribed by the narrator to the Brummie characters. The narrator has a pleasant voice but his North American twang is not appropriate for this very English story. You dont have to l

If you could sum up Beware This Boy in three words, what would they be?

The story that begins with an explosion in an English munitions factory during WWII is not only a murder mystery, but a chronicle of this dark chapter in history. You feel the fear, hear the bombs and relate to the devastation and despair that the German bombers left in their wake. The plight of individuals families makes it all the more poignant.

Roger Clark's narration gives this story its drama and its punch. Maureen Jennings is a very good writer, but Clark's rendering of her novel elevates it to a top-notch tale. His mastery of accents -- English, German, Czech, Russian and American -- is amazing. He makes clear who is speaking, whether man or woman, young or old, with subtlety and authenticity. He never faulters in his task - to tell a good story. His strength is particularly evident in a scene in which police inspector Tom Tyler interviews no less than 12 women at the factory. The reader never loses touch with who is speaking. Bravo!

Who was the most memorable character of Beware This Boy and why?

Brian, the deserter. Through Jennings' descriptions and Clark's excellent voicing of Brian's words and thoughts, we understand how war has transformed a decent young man into a brutal killer. His ability to deny his actions makes them even more chilling. Ditto for Donnie, the punk who blackmails Brian.

This was a much darker story than "No Known Grave," an important picture of daily village life destroyed by the horrors of war. Ms Jennings, and her excellent narrator Roger Clark, do not sugar-coat events nor embellish them, but allow them to speak for themselves. The scene in the mortuary comes to mind.
I would buy other books narrated by Clark.

Ending is abrupt and based on luck

While this was a well-written book in most respects, the ending was rushed. Several threads are left hanging and looking at the blurb for the next book in the series, it seems as if these threads will never be picked back up. Also I'm not big on the main investigator solving a mystery through pure luck, sometimes extreme luck (as in this case). The odds of events unfolding the way they did are astronomical.

The reason I give it three stars rather than less is that the main characters are generally likable, the writing is good, the research is significant, and it's just plain interesting (for me) to read about books set in England during the early stages of the second world war. I do plan to read the next book in the series but I greatly prefer the first book in the series to this one.