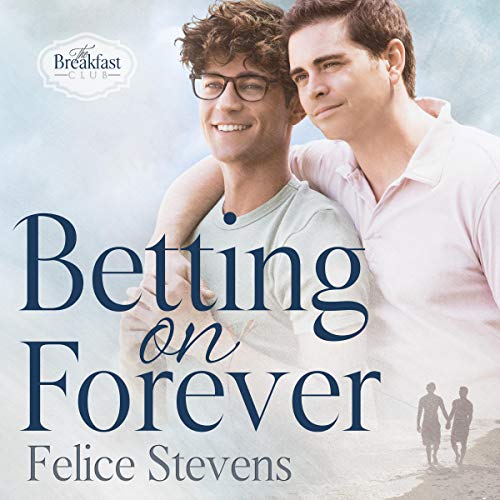 By: Felice Stevens
Narrated by: Charlie David
Try for £0.00

A weekend fling in Atlantic City couldn’t be more out of socially shy Zach Cohen’s comfort zone, but a bet with his best friends forces him to put aside the humiliation he’s hidden for years and step away from behind his computer screens and online world. When he meets Sam Stein, despite their spark, Zach expects nothing more than a night of passion and a kiss good-bye. Yet weeks later, he can’t keep the man out of his head.

After a split-second decision with tragic results ends his 20-year police career at the same time as his relationship falls apart, Sam Stein is drifting through life. At his best friend’s urging, he agrees to a trip to Atlantic City to clear his head. What Sam doesn’t plan on is meeting Zach Cohen, whose sweet nature and honesty has him thinking maybe he could move forward, until Zach leaves him without explanation, reinforcing Sam’s belief that people can’t be trusted.

Well-meaning friends refuse to let Zach and Sam hide from each other, forcing them to realize their weekend was much more than a one-night stand. Before that can happen, Zach must come to terms with his past and stand up for his own independence, while Sam has to learn to take a chance and believe in himself and people again. All bets are off when dreams become reality, and forever doesn’t seem to be long enough.

What listeners say about Betting on Forever

Story: Zack’s and Sam’s story was such a pleasure! I loved both the guys and their meet cute was just perfect! There is just enough angst in the plot to keep the emotions running high, but overall it was a very sweet and well executed love story! And revisiting the other guys was a definite perk!

Became so invested in Zach . Listening to the way he navigates his relationship with Sam . Both men have secrets that are hard to share but to have a relationship they both have to learn to trust , and enjoy the simple thing in life . Beach walks and kite flying.
Highly recommended this audio

Zach and sams storyline got brought to live beautifully

I really enjoyed these guys, Zach especially I connected with right away and I loved seeing him come out of shell. Their connection was easy to see right from the start and this was a feel good book

this was my first time listening to this narrator and I really enjoyed him!

An emotional and inspiring journey!

This is book 2 in the Breakfast Club series and can be listened to as a standalone.

This was an adorable, opposites attract, sweet romance.

I adored Zach. He was so sweet and shy and so charming in his own geeky way.
Sam was all alpha male and possessive. He likes to put on a tough exterior but deep down he has been emotionally scarred.

This was such an emotional, inspiring journey and I loved hearing their story.

Charlie David's audio delivery was absolutely brilliant in this one.

I like Zach's personality his geekiness, the quiet, shy, somewhat anti-social way he is, the way he treats and take care of his friends (although there's one I think don't deserve it, but it's all an act).

Sam's persona is like the gruff, dominate, man in charge attitude. Deep inside he's a hurt, emotional reck.

When Zach got to Atlantic City he became confident and let his inhibitions go.
On meeting Sam the chemistry between them sparked, they hooked up.
On returning home Zach never let his friends know that he net and hookup with someone on his trip.
Sam found out about the bet and wanted nothing to do with Zach.
Thankfully his friends rectify the situation.

thanks Felice Stevens, I enjoy every work.

A beautiful story of finding oneself!

Perhaps not as emotional and intriguing as book one in the series (but the stakes were set high with that), but a wonderful story nonetheless.
I loved the personal development of both Sam and Zach, who held so much of themselves hidden to the world, but it only took meeting and falling in love with the right person to open up a well of possibility both of them are more than willing to explore!

This is my absolute favorite book and I really loved the original audio book. But this is Charlie David! You just know he's going to do a phenomenal job bringing these guys to life. I admit that it took a little while to adjust to hearing a different voice but once I settled into Charlie's rhythm, I lost myself in the story all over again. He did such an amazing job with my boys. His inflection brought life to each of the characters so perfectly, I didn't want it to end. This is an audio that I'd listen to again and again.

This was a fantastic addition to the Breakfast Club series! We initially met Zach in the first book, beyond the Surface, and I just had to know more about him. I was so excited to listen to Zach’s story. Zach is so shy and quiet; you just want to give him a big hug! Zach often keeps to himself, and certainly isn’t the random hookup type. Cue a conference in Atlantic City and he meets Sam in a bar and it’s an amazing night of passion for them both. Circumstances separate them from proper goodbyes in Atlantic City, but thanks to meddling friends they find each other again. Each brings their own personal baggage into the relationship and at points you’re not sure if they can each get past their own demons. If you love a story with friendships, romance, love, and a dose of angst this is a must-read or listen for you! Charlie David did a wonderful job of narrating Zach and Sam’s story, I couldn’t recommend this book, or series more!

this book is all about unexpected love between the two men. Must read all books of this series.