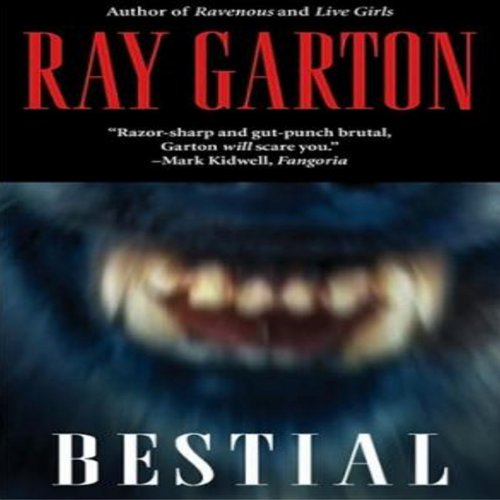 Something very strange is happening in the coastal California town of Big Rock. Several residents have died in unexplained, particularly brutal ways, many torn apart in animal attacks. You might think there’s a werewolf in town. But you’d be wrong. It’s not just one werewolf, but the whole town that’s gradually transforming.

Bit by bit, as the infection spreads, the werewolves are becoming more and more powerful. In fact, humans may soon be the minority, mere prey for their hungry neighbors. Is it too late for the humans to fight back? Did they ever have a chance from the start?

What listeners say about Bestial

Ray Garton lets the fur fly with this one!

Ray Garton let’s the fur fly in this one for sure. There’s plenty of saliva, gore and doggie spew dripping all over the pages. Eeeww. Gross. Yep. That’s Garton.

Something lupine is running amok in the small coastal California town of Big Rock. It has friends. It wants to have lots of friends. Perhaps, the entire town if it can. It’s sure gonna try.

This didn’t waste any time getting right to it. It picks up in Big Rock sometime after the events of Ravenous. The besties are back, getting stronger and are multiplying. It’s up to a small group of concerned citizens and a few others to see if they put a spade to these here doggies. Neuter the threat to the town, so to speak.

Per Garton usual, if you have delicate sensibilities, then you may want to go read some John Green and have yourself a healing little cry instead. If you want a lycan baby murderous rampage, church-house puppy pounding and have some soapy bath time fun with Momma, then by all means, proceed. You have been warned.

I really did not care for the narration of this one at all. I upped the speed to 1.25x and it still wasn't good, but it was much better than at 1x.