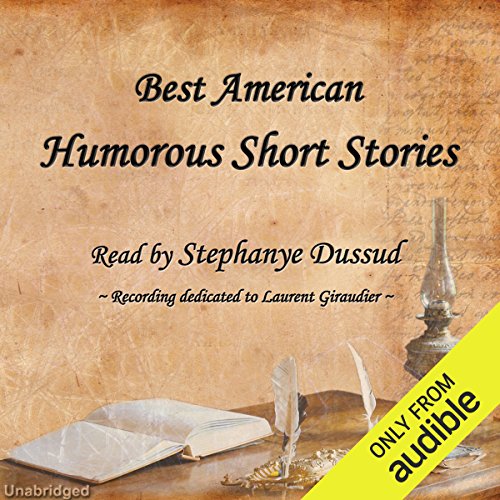 Eighteen of the very best American short stories, each a classic in its own right.

Stories include "The Little Frenchman and his Water Lots", by George Pope Morris; "The Angel of the Odd", by Edgar Allan Poe; "The Schoolmasters’s Progress", by Caroline M.S. Kirkland; "The Watkinson Evening", by Eliza Leslie; "Titbottom’s Spectacles", by George William Curtis; "My Double and "How He Undid Me", by Edward Everett Hale; "A Visit to the Asylum for Aged and Decayed Punsters", by Oliver Wendell Holmes; "The Celebrated Jumping Frog of Calaveras County", by Mark Twain; "Elder Brown’s Backslide", by Harry Stillwell Edwards; "The Hotel Experience of Mr. Pink Fluker", by Richard Malcolm Johnston; "The Nice People", by Henry Cuyler Bunner; "The Buller-Podington Compact", by Frank Richard Stockton; "Colonel Starbottle for the Plaintiff", by Bret Harte; "The Duplicity of Hargraves", by O. Henry; "Bargain Day at Tutt House", by George Randolph Chester; "A Call", by Grace MacCowan Cooke; "How the Widow Won the Deacon", by William James Lampton; and "Gideon", by Wells Hastings.

What did you like most about Best American Humorous Short Stories?

I liked the fact that they were all short stories. You are striaight in there. The humor was not quite what I anticipated but that means it challenged my thinking.

Each story can be done in one sitting.

I' m going to re listen to this book. There was so much to enjoy that it will be a long time before I can choose a favorite story from this selection.

There's an impressive number of stories here, but good luck finding them. The stories do not show up with their titles when downloaded on your iPod. When played, the narrator identifies the title and author of the first story. But the narration for the second story starts within the heading of "Chapter 1." The third story starts in "Chapter 2." In most cases, when you try to advance to the next chapter, you end up in the middle of a story. You don't know what you're listening to. In most cases it's impossible to skip ahead and select a specific story.
Stephanye Dussud is a pleasant enough narrator. She's best doing a French accent and worst when attempting a Southern dialect. But there's a sameness to her performance. There's also a sameness to the stories. The title of the collection would lead you to believe they span the breadth of American humor. But most were written in late 19th century. Aside from the work of Mark Twain, many are (very) light comedies of manners that haven't aged well.

Some delightful stories spoiled by the narration.

Having difficulty staying with the audiobook due to the narrator. I will finish it but it will take a lot of work.

No levity or personality to her reading.

While the narrator's voice is pleasant I am not convinced she enjoyed reading the book aloud. She needs much more life in her performance to make the characters come to life.

Though some of these storiesay be classics they certainly aren't America's best humor. Infact some of the stories like "titbottoms Spectacles" are down right sad. Though the title promised humor. ( it was about a man who could see the true nature of people with some special eye glasses.).
Other stories were down right offensive, but not in a funny way. Like "Giddeon," a story about a former slave who becomes a new york performer, only to ruaway back south where he abducts a young girl to make her his wife.
In general these stories are to outdated too outdated and contextual to be really funny. For example "the callers" is about the nervous trials two young boys face while attempting to "call" on some neighbor girls.
The only really good stories in this collection were those by Mark Twain and O'Henry. You are much better off buying a collection of there stories and skipping this one.

A previous reviewer complained about this Audiobook because his IPOD didnt play it well.
The EXACT OPPOSITE is true with KINDLE. Every Story is a Chapter. The list of stories is read out at beginning of chapter 1 and then every title is introduced by narrator, at beginning of each chapter. AUDIBLE and KINDLE a perfect match.

As for content, I think the title misleading. These surely ARE NOT the 18 BEST American short stories - they might be 18 stories for which no royalties had to be paid to the Author, but that is an issue for another time and place.

Priced at less than $5 they are good value indeed.