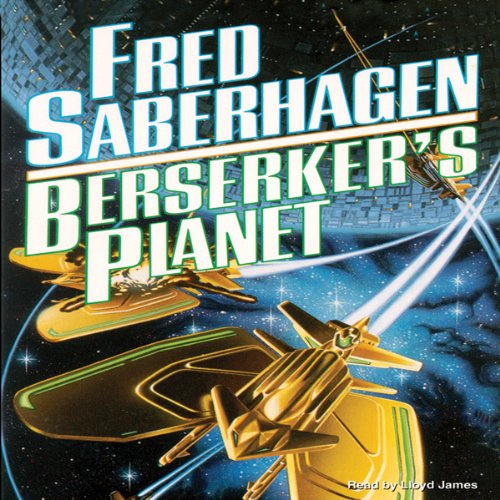 The rifle stutters in Suomi's hands. The sword-brandishing golem's left arm erupts in a spray of dry-looking particles and smoke as the man-thing spins in an incredible pirouette, more graceful by far than any wounded animal. Knocked off balance and deflected from its course by the shock of the rifle's force-packets, the towering shape slides past Suomi and on down the slope.

But it does not fall. In another moment, near the bottom, it regains full control and stops its slide. Then it turns and calmly climbs, like a mountain goat, at a fast run. The sword, whirling and gleaming, comes toward him once again.

Five hundred years have passed since the combined fleets of humanity met and broke the berserker armada at Stone Place. But though the human victory was total, one of the killer machines (weaponless, its star drive a ruin) managed to limp to a secret sanctuary on a planet called Hunter's World. Over the years, a new cult has arisen there, a cult dedicated to Death as the only and ultimate Good.

What listeners say about Berserker's Planet

Good but little or no sci-fi action

This is NOT the first book in the series. I assumed, by the copyright date, that this was the beginning of the Berserker series. I was wrong. This book has nothing to do with the series other than the mention of 1 characters name. If you skipped this book youd never know you missed part of the overall story.

Prior to this book I listened to Berserkers The Beginning which was a series of short stories. I HIGHLY recommned that you download that book from audible.

This book is 1 story of 1 planet, and sadly, there is no mention of the giant Berseker war. The first 4 hours of this 6 hour story are just character buildup and about 5 minutes of the Berserker war story. If you listen to this book prior to any other Berserker books you will have no idea what a Berserker really is and what the war is all about.

I love the series and dont regret listening to this book. However, this book can be entirely skipped in the series. This book has no relation to the rest of the series at all. It is essentially a short story made longer.

The man sized Berserker in this story is not mentioned until the very end of the story. That being said, you can imagine how little of a battle there would actually be if theres only 1 chapter to create a scene for you.

I've enjoyed a few Audible books which have had reviews criticizing how slow the narrator was. None of them bothered me at all, but this one isn't slow it's frustratingly, mind numbingly slow. This would have been the 1st audible book I didn't finish if it wasn???t for the iPod option to speed it up. It really is a decent story & if you???re into the Berserker series it's interesting. Just be prepared to grind your teeth if your player can't be sped up.

I've loved every Berserker book except this one.

I'm not sure if it was just a boring story, the bad narration - probably a combination. I've loved every other Berserker book, but this was awful. The story moved incredibly slowly and the narrator sounded like he was distracted with his taxes the whole time. How slowly does the story move? At one point it spends two to four minutes reading out a list of tribal names, few of which are ever mentioned again. Many of the minor characters would get a little background story moments before they were killed off and forgotten. This appears to have been a manuscript that was growing in the back of Saberhagen's refrigerator.

how did I miss this?

this was my first book by Fred Saberhagen, I liked it! it was an easy pace and never drowned you in hard science fiction. look forward to the next story in the series.

I like the berserker series, but this is simply the worst book by far. And the narrator should find a new job. He's terrible.

Comparable to the original reading of the book

What made the experience of listening to Berserker's Planet the most enjoyable?

The narrator. He was also good in The Moon is a Harsh Mistress and Double Star by Hienlien

What was one of the most memorable moments of Berserker's Planet?

The first duels, as well as the Berserker God climbing the knoll that the spaceship was on

The emotion he brings to the reading.

A very tiresome reading of a not very interesting story. People you don't care about do things that make no sense with a weird get-it-over-with ending. Blech.