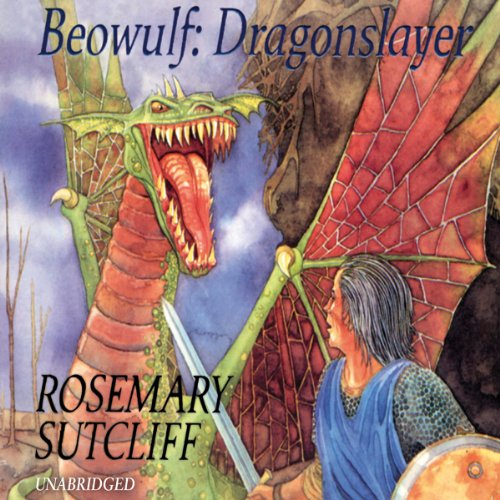 By: Rosemary Sutcliff
Narrated by: Sean Barrett
Try for £0.00

Grendel prowled in, hating all men and all joy and hungry for human life. So swift was his attack that no man heard an outcry; but when the dawn came, 30 of Hothgar's best and noblest thanes were missing.

Only Beowulf, foremost among warriors, has the strength and courage to battle with Grendel the Night-stalker. In this thrilling re-telling of the Anglo-Saxon legend, Rosemary Sutcliff recounts Beowulf's most terrifying quests: against Grendel the man-wolf, against the hideous sea-hag and, most courageous of all - his fight to the death with the monstrous fire-drake.

I can’t fathom why rosemary sutcliff is touted as a children’s author - this excellent version of Beowulf is not especially a children’s version, and it’s excellently performed by Sean Barrett. Don’t pass over this rendition, assuming it’s somehow simplified for children - it’s really not. Sutcliff had a real genius for drawing out the essence of a great story.

Exactly what audiobooks are for.

The Saga of Beowulf beautifully retold by Sutcliffe and conjured to life by Sean Barrett.

Faithful retelling of the original

What was one of the most memorable moments of Beowulf: Dragon Slayer?

Sutcliff adapted the original in a few spots. For instance, the

I listened to this alongside an unabridged audio of the original; my 12-year-old daughter enjoyed it as well. Sutcliff's retelling is vigorous, engaging, and faithful to the original. The reader is very good and really brought the story to life.

If you could sum up Beowulf: Dragon Slayer in three words, what would they be?

This story oozes with honor -- Beowulf is a fearless, loyal hero.

Excellent history on audio. After reading about Beowulf in homeschool history, we listened to this version while in the car. I'm so pleased we added this to our audio library.