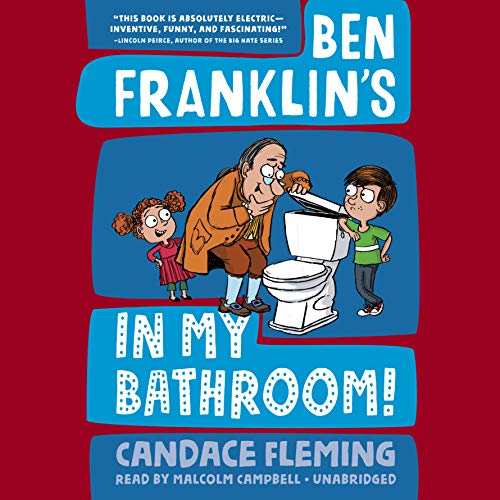 Ben Franklin's in My Bathroom!

History meets hijinks in this first title in a hilarious new middle grade series for fans of Timmy Failure and The Terrible Two, when Ben Franklin accidentally time travels to a 10-year-old's home in 21st-century America!

Nolan is a typical kid living in a typical 21st-century American town. Ben Franklin is, well, Ben Franklin - Founding Father, inventor of the lightning rod and bifocals and more. When, through a bizarre set of circumstances, Nolan and his little sister, Olive, find Ben in their house, chaos isn't far behind.

From introducing him to the toaster to taking him to the public library (another Ben invention) to preventing a nosy neighbor from blowing Ben's cover, Nolan does his best to be Ben's tour guide to the new world he helped form.

"What a smart, funny, action-adventure! This is bursting with great heart, fascinating history, and Ben Franklin's stinky feet. I want more, more, more of this series." (Jon Scieszka, author of the Frank Einstein series)
"This book is absolutely electric - inventive, funny, and fascinating! Ben Franklin himself would approve!" (Lincoln Peirce, author of the New York Times best-selling Big Nate series)

What listeners say about Ben Franklin's in My Bathroom!

Our entire family enjoyed listening to this book! Full of great lessons. This book is fun and engaging.

Me and my review