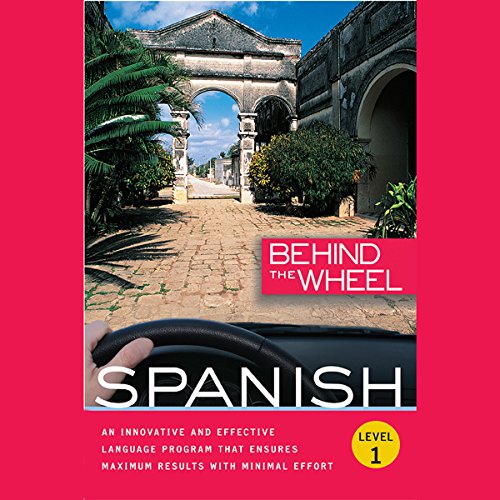 Behind the Wheel - Spanish 1

Behind the Wheel - Spanish Level 1 covers beginner to intermediate level Spanish, providing a flexible, solid, and universal foundation in speaking, understanding, and creatively expressing yourself in Spanish. The program features an English-speaking instructor to guide you through the lessons and two native Latin American Spanish-speakers to aid with your pronunciation. Includes a companion book to reinforce and enhance the audio experience.
Download the accompanying reference guide.
©1982 Language Dynamics (P)2008 Macmillan Audio

What listeners say about Behind the Wheel - Spanish 1

If you've already listened to so some Spanish language audiobooks then this has a lot of content for you to practise with. However, its strength is also it's weakness. You just don't have time to take it all in. I am now listening for a second time and the pace is still too much.

I definitely would give Behind the Wheel 2 a try. But I think I might see if I can find something else first.

If you are a complete beginner, I would definitely try the Paul Noble, Collins books first. They are much better for complete beginners. If you already know a bit of Spanish, this will keep your brain busy as you drive.

I listen to this in my car during my daily commute and it helps get my mind into that 'work mode'. It's very easy on the ear, and the way they build up the vocabulary and tenses is very logical. I have some very basic (and I mean Basic) Spanish already which helped me get going but the best bit for me was being able to say simple sentences in future and past tenses, quite quickly. I'm not sure what Spanish accent I'm learning, but I think this one is some kind of Latin or South American - definitely aimed at the US market. No matter as whichever it is I'm guessing (hoping) it can be understood wherever Spanish is spoken, which for my purposes would be on the Costa's of Spain. I've tried a few courses where you're just supposed to pick up the language intuitively somehow, but my middle aged brain likes a bit of structure and this fits the bill nicely. Comes with an enormous downloadable workbook too. Good for underpinning lessons learnt as you go along or propping up a wonky coffee table. Only downside is, on my phone at least (which is where I keep it and beam it into my car from) you can only go back in sections of 30 seconds. If you try and go back a 'chapter' it just goes right back to the beginning. Could just be my phone though - haven't tried it on the computer.

It covers basic vocabulary and expressions in a simplest way. I listened to it a few times already and more and more sinks in. Recommended.

One of the good language audiobook makers

This audiobook has a good no. of repititions of pronunciations & examples, for a steady learning curve, that one feels confident after the first run of the book itself.

If you began your Spanish quest with Rapid Spanish, by Ear Worms, you will be disappointed because it is more Castilian, or continental Spanish, like spoken in Spain. Compared to Mexico or Latin America it is like talking Spanish with a lisp.

This program may not provide all the tools you will need to become fluent in Spanish, but combine with other lexical Spanish programs like Michel Thomas's program you will be headed in the right direction. (Hopefully Audible will add more than just the introduction of his great program.)

Words learned orally will be much more likely to be correctly pronounced. So, starting with this program and supplementing it with another should allow you to be understood, and sound less like a gringo.

This is more like learning to play music by ear, starting with imitation, not music theory.

This has turned out to be the best audio-only language instruction I've found so far, and I've wasted some money in the process. The whole course is over 9 hours, and covers everything from a-b-c to verb forms to idiomatic cliches. Expect to spend a lot of review time, because practice, practice, practice is the basis for any language learning. Don't believe the "learn a language in 30 minutes" people. If it were that easy everyone would speak many languages. This course is set out systematically, and the speakers go slowly enough that I could usually follow the first time. I reviewed every unit at least twice, some of the harder ones I did on both the morning and night commute for a full week. At the end I find I can assist my teenager in her second year high school Spanish!
Whatever I choose for my next course will include some printed material. There were a few times I could have either heard a word spelled or been able to see it in print. But for a course for an absolute beginner, this one lays a firm foundation and a great value.

OK addendum to other Spanish learning

OK addendum to other Spanish learning, but insufficient on it's own. I study with other apps and sources, so this is ok to walk to work or commute

helpful aid to an actual course

it is helpful but it needs to be paired with a course in spanish or atleast a book in order to learn how to conjugate verbs.

This is decent for intro Spanish lessons

This program is OK for learning some basic Spanish. There isn't much logic to the way the course is structured, but since there is some basic material, this is the best of the 3 BTW Spanish courses. New concepts are introduced randomly and without explanation, while at other times, very basic lessons are belabored. The narrator is somewhat annoying, as others have pointed out. His pronunciation is very poor, though thankfully, most of the lessons are spoken by a Peruvian native speaker who has a rich accent. He frequently says things like "remember, an infinitive is the dictionary definition of a verb". This is nonsense. I think if you learn Spanish exclusively with this series, you're going to end up with a poor grasp of it, since so much is glossed over. This is just an adequate auditory supplement to other more interactive courses where you will learn actual grammar and spelling.

All this is is a list of phrases without context. No meaningful program development. Waste of time and money.

This is by far my favorite audio book series for learning a new language. It is easy to follow and learn from. I play it for my children as well. Would definitely recommend to others.

I have been using a large variety of language resources, including Rosetta Stone (which I am not entirely pleased with) and this is by far the worst. Get some of the free podcasts such as Coffee Break Spanish and Spanish Pod and you will be much better off.

Not very good, but cheap

I have several issues with Behind The Wheel Spanish. The English speaker's voice is terribly monotonous. He sounds bored and almost annoyed. The lessons are very brief. To really learn them, you'll need to repeat them, but there are no track dividers, so you have to scan backwards to get to the last jump-off point. Also, the English speaker continually repeats annoying and useless phrases (my favorites: "Remember: an infinitive is just the dictionary definition of a verb" and "Learner, remember to always repeat after the speaker"), so you end up having to listen to them multiple times. As other reviewers have said, the lessons don't really build on each other. It hops from one thing to something completely unrelated. The accompanying booklet does not match what is spoken. Some spoken bits are skipped, and some words that are not spoken are added. It's almost like it refers to a different version of the recording.

On the plus side, it's very cheap.