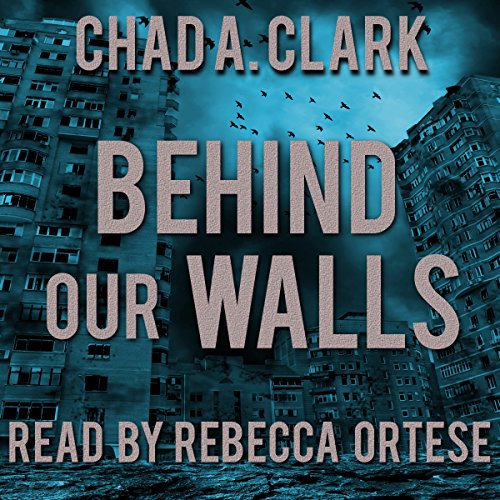 By: Chad A. Clark
Narrated by: Rebecca Ortese

The world has fallen to ash.

Governments have collapsed, police and armies no longer exist and the people of the world have been left behind to fend for themselves in the midst of escalating violence and nuclear fallout.

One community of survivors find each other, come together, and try to rebuild, to start over. Confronting the threats from without and within, they do everything necessary to find the only thing left, the most scarce resource of all.

What listeners say about Behind Our Walls

"We should have expected this."

Behind Our Walls has good potential, as is displayed by the excellent final thirty minutes or so of the book, the author's vision combining with skill of writing to create a vibrant picture of both external events and internal pressures. But it is a long way to this point, travelling with the main protagonist through a remarkably unbelievable few months. Leaving their urban home after the news of nuclear explosions in the East and Western states and reports of some rovers in their area for a safer place somewhere, pushy, self opinionated Sophie, younger, resentful sister Fiona and her husband-to-be, and their parents, pick up a lone hitch-hiker three days before the mother is shot dead by rovers. Without apparent further incident, they find a hut in which to hide throughout the winter months, huddling together for warmth and eating cold canned food foraged from supermarkets. They gratefully emerge well over six months after leaving home to walk on, looking for somewhere better to stay.

Without reprising the entire story, I found their failing to see almost anyone remarkable - I know parts of the U.S. are huge and empty, but surely there would be a great influx of outsiders also struggling to survive. All the more remarkable, then, that many months after the nuclear disaster, stores still have a fairly plentiful supply of goods of all descriptions including guns and ammunition, and, although now running low, there is still petrol to be found. From where? Surely the gas station pumps are not still working, given that the power isn't available. And they seem to acquired magic seeds when a garden not sown until early summer is in full production just a couple of months later. This reader would like some of those, please. And never a mention of possible nuclear fallout. Ever.

Lots of emotional outbursts, sibling rivalry, angst about the rights, or not, to defend themselves and others by force, the obligatory (brief) sex scene and gallons of tears. An excellent story idea badly delivered. The narration, on the other hand, was good. Rebecca Ortese has a pleasant voice, well articulated and with good intonation, easy on the ear. She read with understanding of the text, excitement in her delivery when the action demanded it and, although male voices are not her forte, each individual protagonist, and there are many, is given their own, mostly appropriate voicing. Her performance definitely enhanced the reading experience.

My thanks to the rights holder of Behind Our Doors who, at my request, freely gifted me a complimentary copy via Audiobook Boom. Even though the majority of the book was disappointing in it's lack of a sense of reality, the essential idea itself is a good one and, now that the baseline has been established, the following book could well be much better. But I, personally, do not think I will continue with this series.

A different take on end of the World scenario.

This is a well crafted story that is character driven,it does not take the easy road like most end of this world Novels.

The writer has created real people with issues the Listener can identify with and care about.

The Narrator makes the story come alive with a good performance.

This was a fairly typical post-apocalyptic story but without zombies. Very character driven with a basic plot line. Easily could be a few episodes from TWD. There was decent character development but I didn’t care for many of the them and you can’t get attached to anyone. Sophie was probably the most relatable and developed character. I felt that Fiona was a more influential antagonist over the Rovers. She was really the only one I liked and that was because she was the weirdest and I couldn’t ever figure out what was driving her. She was a really odd character and provided most of the internal and external conflict the group had.

The plot on where to setup a base was interesting. Everybody kept trying to find a safe place and the place they end up was quite unique. Reminded quite a bit of the prison season in TWD. Wanted a little more action involving the Rovers. They were a Mad Max style biker gang that I think can provide some neat stories. Definitely a different style apocalyptic story where you don’t get a lot of blood and guts which is a nice deviation from the norm.

I really wasn’t a fan of the narrator. She made everything sound like a run on sentence. Needed a better cadence and I couldn’t handle Lot’s voice, he constantly sounded like a hoarse person trying to yell. I liked her narration voice, just didn't really like the character voices.

Behind Our Walls is An interesting variation on post apoc - and that isn't easy to acheive! But the author does just that and makes a gripping and interesting tale, about people first and foremost and surviving second.
Great characters good storyline.
Narration and audio quality are excellent, and has been well edited.
I was given a free copy of this audiobook at my own request, and voluntarily leave this review.
My opinion - A good listen/read.

This was a bi of a different apocolyptic book.It was the story of what was left of a family and the blame they put on one daughter.She knows she's a scapegoat ,yet keeps trying to lead them to safety.Rebecca Prtese was a fine narrator.I was given this book by the narrator,author or publisher free for an honest review.

The world is unrecognizable; civilization as we know it is over. But there are no zombies, no skin melting diseases, no otherworldly threats, just your good old fashioned terrible people to contend with! A few groups of people band together over the idea that there is 'safety in numbers' and find themselves working on setting up a new society for themselves. This story follows this group as they form a hierarchy and attempt to rebuild. This is story about people - how they handle death and loss, how they handle violence and new rules. I prefer my apocalypse stories to have villains that are more compelling than just 'bad guys with guns' as we have those people in our civilization already. That's a personal preference though, if you don't require spookiness in your apocalypse story then you very well may enjoy this one! Rebecca Ortese does a good job with narration.

This was a decent take on the post war apocalypse genre. It doesn't go into too much detail on what happened before you join the main characters, but you get enough to get into the story. The story itself, has a strong resemblence to the recent Walking Dead story but without the zombies. That isn't a complaint, just an observation. In the story, you encounter the best and worst of humanity that has survived. All in all, this was a well narrated and interesting story. Worth checking out if you like this genre.

Great Start of a New Series in the PA Genre!

Behind Our Walls Trilogy, Book 1 written by Chad A. Clark narrated by Rebecca Ortese.
The post-apocalyptic genre is becoming stale with the same format of the world being destroyed. The events proceeding, during and after the apocalypse described in detail is almost boilerplate format now. Some authors are trying to find new ways in this genre to tell stories that are compelling for listeners and readers. Mr. Clark has chosen to focus on the character-driven narrative of the survival of humanity after an event of some type of nuclear exchange and societal collapse.

The story starts following a small family unit and their struggles to survive day to day. The harsh reality of dealing with man’s inhumanity to man. How women will become a prize and victimized. Trust will be a rare commodity. Groups will need to come together for mutual protection. The author paints a very grim world with some truly vivid characters that are interesting and enjoyable to follow. This is the first time I have heard a performance from Ms. Ortese. She did a good job with the wide cast of characters. This book was given to me for free at my request and I provided this voluntary review.

After the fall book

Great potential to the book and to the series, think the narration needs some help. Story is a bit short to use a credit on, but if it hits a sale it would be worth getting.

This book was provided at no cost for a fair and honest review.

The story is a standard fare for the post apocalyptic genre with the added flare of a struggling family dynamic. This was a rather interesting surprise and I found myself quickly on-board for the ride.

The main character is interesting and relatable. Some of the choices and dialog leave you slapping your head and grumbling but something interesting always happens along quickly to keep you moving.

The narrator was pleasant to listen too and did a good job with the task of character separation.

I found this to be an enjoyable listen with some lingering tidbits as a memorable take away.

I really enjoyed this post-apocalyptic tale, loved the characters, story and narration. I've been really into post-apocalyptic stuff lately, and this was a nice addition :) Crazy intense thriller without too much gore (I don't mind gore at all, mind you), and really enjoyed it. Definitely an interesting and unique approach, if you like TWD you'll love this :) I'd definitely recommend giving it a listen, all in all great great book! :)
I was given this free review copy audiobook at my request and have voluntarily left this review.