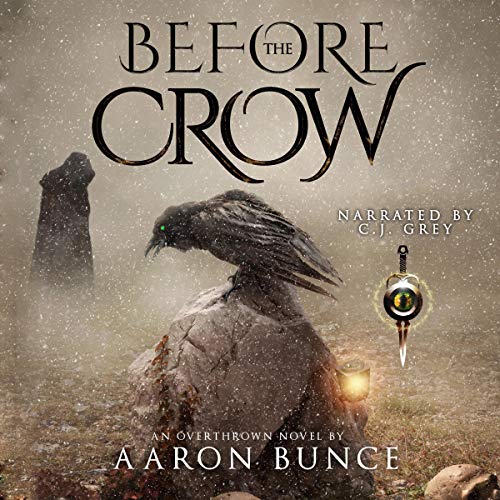 Before the Crow (A Grimdark Epic)

The five provinces of Denoril are in peril. A dark force rots the realm from within, gathering strength and preparing for an assault that will topple it into chaos.

Only a handful of people stand between Denoril's annihilation and salvation. Roman and his friend Dennah are accused of vicious crimes they did not commit. One man can prove their innocence, but their desperate quest to find Frenin leaves them crushed between men seeking justice and an unforgiving blizzard. With nowhere else to run, their only salvation may lie with the law's darkest agent, the Crow.

Julian, the former initiate of the Silver Guard, then enslaved, was left for dead by his captors. He watched his best friend murdered to resurrect Denoril's overthrown King, Djaron Algast. Placing his life and trust in a mysterious and dark Nymradic, Julian must find a way to win his freedom and return to his beloved Tanea, before Craymore falls. But will he be forced to sacrifice too much?

Julian must embrace the darkness to realize his new purpose, while far to the south, in the snow, Roman must grasp his power to escape the darkness within.

What listeners say about Before the Crow (A Grimdark Epic)

Along the same lines as the first book, we get to see things from many different players in this story. There is a lot more action happening as we have gotten a big chunk of the world building finished. It will be interesting to see what happens as the different players circle closer to one another.

*I requested this book and am voluntarily leaving this review

Hindsight is 20/20. If I had a nickle for everytime these characters meant to, should've or wished they'd done something I'd be a rich reader...

It frustrates me to read an Author adding a rape scene into his books & doesn't have 1 single effectual character to help the 16 yr old girl-woman.

Also, what's the NEED to make innocent animals get killed? It's so hard to listen to loved animals being brutally killed. So hard. Even IF the author brings back the poor animal's soul/essence..

Other than these prickly issues, this story was good. I just don't recommend it for any Young Adult readers though.