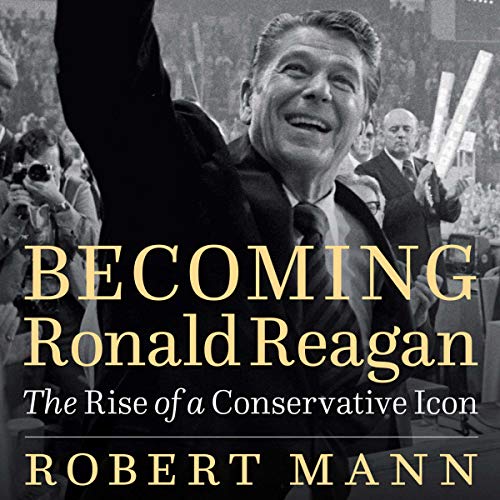 By: Robert Mann
Narrated by: Barry Dean Evans
Try for £0.00

In the 1960s, transitioning from acting to politics was rare. Ronald Reagan was not the first to do it, but he was the first to jump from the screen to the stump and on to credibility as a presidential contender. Reagan’s transformation from struggling liberal actor to influential conservative spokesman in five years - and then to the California governorship six years later - is a remarkable and compelling story.

In Becoming Ronald Reagan, Robert Mann explores Reagan’s early life and his career during the 1950s and early 1960s, including his growing desire for acclaim in high school and college, his political awakening as a young Hollywood actor, his ideological evolution in the 1950s as he traveled the country for General Electric, the refining of his political skills during this period, his growing aversion to big government, and his disdain for the totalitarian leaders in the Soviet Union and elsewhere. All these experiences and more shaped Reagan’s politics and influenced his career as an elected official.

Mann not only demonstrates how Reagan the actor became Reagan the political leader and how the liberal became a conservative, he also shows how the skills Reagan learned and the lessons he absorbed from 1954 to 1964 made him the inspiring leader so many Americans remember and revere to this day.

“Will emerge as the standard interpretation of Reagan’s ideological evolution and his development as a major political figure. A must-read.” (Robert David Johnson, professor of Brooklyn College and the City University of New York Graduate Center)

“With empathy and critical insight, Robert Mann guides us on a journey through Ronald Reagan’s personal and political awakening.” (Joshua M. Zeitz, author of Building the Great Society)

Unfortunately this was another thinly veiled
"Hate Reagan Book" The author failed to understand even the basics of leadership.
Safe the money... Unless you enjoy innuendo and snobby "We know best" diatribes & history deniers you won't make it through this book.