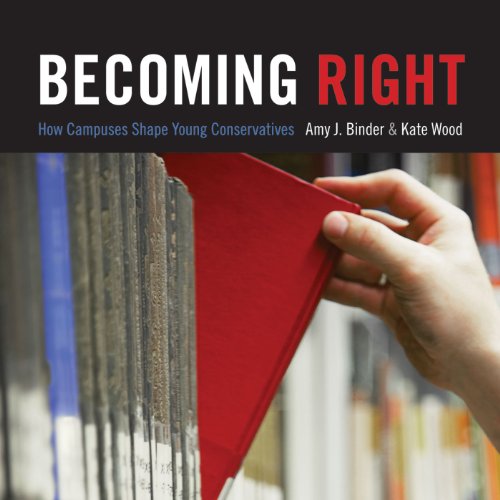 Conservative pundits allege that the pervasive liberalism of America's colleges and universities has detrimental effects on undergraduates, most particularly right-leaning ones. Yet not enough attention has actually been paid to young conservatives to test these claims - until now.

In Becoming Right, Amy Binder and Kate Wood carefully explore who conservative students are, and how their beliefs and political activism relate to their university experiences. Which parts of conservatism do these students identify with? How do their political identities evolve on campus? And what do their educational experiences portend for their own futures - and for the future of American conservatism?

Becoming Right demonstrates the power that campus culture has in developing students' conservative political styles and shows that young conservatives are made, not born. Focusing on two universities - "Eastern Elite" and "Western Public" - Binder and Wood discover that what is acceptable, or even celebrated, political speech and action on one campus might be unthinkable on another. Right-leaning students quickly learn the styles of conservatism that are appropriate for their schools. Though they might be expected to simply plug into the national conservative narrative - via media from Fox News to Facebook - college conservatives actually enact their politics in starkly different ways.

What listeners say about Becoming Right