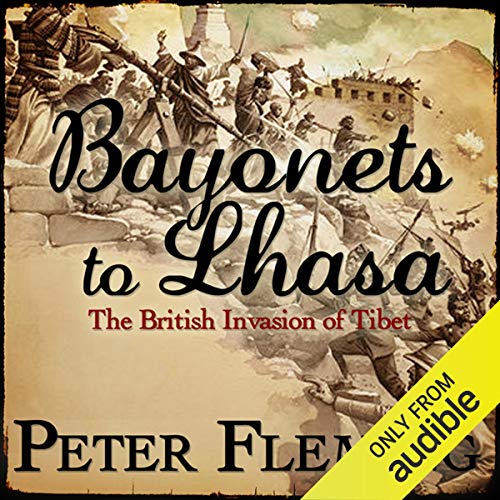 The British invasion of Tibet in 1904 is one of the strangest events in British imperial history. Conceived by Lord Curzon as a strategic move in the Great Game - that colossal struggle between imperial Britain and Tsarist Russia for influence in Central Asia - the incursion was in fact ill-conceived and inspired by only the weakest of motivations.

Led by the soldier, explorer and mystic, Francis Younghusband, the mission - doomed from the very beginning - became caught in political cross-fire and the distant and destructive machinations of China and Britain and ended in ignominy and disappointment for this idealistic adventurer.

Peter Fleming's gripping portrayal of this curious episode and its charismatic protagonists brilliantly illuminates what is now seen as a key moment in the Great Game, the repercussions of which continue to be felt throughout the region.

What listeners say about Bayonets to Lhasa

Francis Younghusband is the soldier who planted the Union Jack in Tibet in 1904. This book recounts the Great Game and interior politics of Curzon and British diplomacy around the turn of the century.