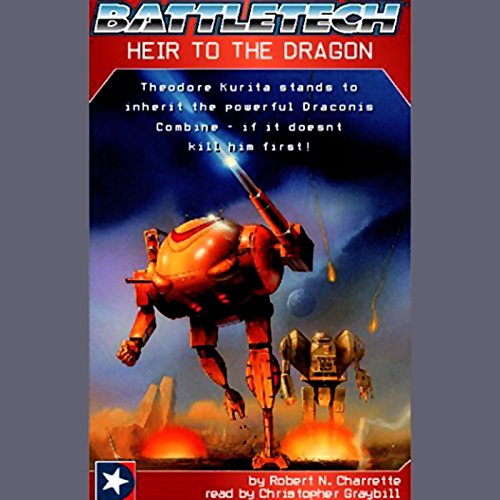 By: Robert N. Charrette
Narrated by: Christopher Graybill
Try for £0.00

Theodore Kurita is heir apparent to the Draconis Combine, one of the most powerful realms of the Inner Sphere. But the Draconis Combine has never been a place of smooth transitions. Historically, a Kurita proves himself fit to lead by a successful bid for power, political or otherwise.

Theodore's perilous journey to power is a 20-year odyssey of lethal encounters and narrow escapes. And at the end awaits the most dangerous foe of all, the man whom Theodore must one day dispose, his own father.

Don't miss the rest of Battletech.
You can also get this title as part of the Battletech Collection II.
©1988 WhizKids, LLC (P)2003 Listen and Live Audio, Inc. and The Cutting Corporation, Inc.
Science Fiction
Show More Show Less

What listeners say about Battletech

Scam. Abridged and not marked.

Abridged works are only acceptable if the reader understands they’re receiving an inferior version of the original work. There is no clear disclosure that these works are abridged. Utterly disgraceful.

Not the Battletech novel to start with

First let me mention, these weren't made for Audible, they were apparently made to be two-cassette books on tape. Each is divided into four ~hour long chapters and pretty heavily abridged to fit within that space. In some cases whole plot points are dropped. The performance by Christopher Graybill is rather good, though I wish he had kept character voices consistent throughout. It's not too bad within one book, but taking these six books as a series, some characters end up with the voices of others. Here, Theodore has a neutral American accent, but by the events of Blood Legacy he has adopted the breathy accent Hanse Davion spoke in at the beginning of Lethal Heritage. It's slightly confusing.

This book is included in Battletech Series 2 here on Audible, despite taking place before the books in Series 1, and that was a good decision. Series 1 is the better place to start reading. That's the Blood of Kerensky trilogy, which tell one cohesive story of the Clan invasion of the Inner Sphere from about a dozen points of view, in which Theodore Kurita is a minor character. This book, Heir to the Dragon, is about Theodore Kurita's life prior to the Clan invasion, or the 8 or 9 most pertinent hour-long anecdotes thereof, and along the way we get to see a bit about life in the royal court of the Draconis Combine.

There are a few strange things to note. Theodore is apparently a very attractive man and he keeps getting more attractive as he matures...according to the inner monologue of his aunt and cousin, but not his wife. He has a really rocky relationship with his dad you guys; he's overly critical, he never listens, he doesn't understand. It's not fair! Oh, that thing where Theodore promotes Shin Yodama to Chu-Sa in Lethal Heritage by meeting with him personally and finding an excuse to address him by full name and (new) rank? Yeah, they do that about four times in this book, partially as an excuse to bombard the listener with Japanese terms and partially to show you that that's just how it's done in the Combine. Also, the Kurita royal court has like, intrigue and such, there are apparently several different and competing spy networks and orders of turbo ninjas. There are several attempted assassinations and coups and such.

There are several battles depicted, but the book seems to kind of get tired of them and jump ahead a few months or years to the next thing that happens. It's like "So he saw his grandfather get shot when he was six, then there was that time when he was 20 when he got into that sword fight which was all a test, then I guess there was that time he was stationed on that backwater moon because his dad was sick of him, that led to this big battle with the Lyrans where he played this game of cat and mouse with their commanding officer...what else? Oh, then there was that time on the dropship..." It doesn't tell a cohesive story, there isn't an introduction, middle, climax and conclusion. Just here are some things that happened to this character. It's basically 3 hours of exposition.

Long review short, this book is for the people who read the Blood of Kerensky trilogy and then asked "Hey, could you tell me more about the background of that Theodore Kurita guy?"

A lot shorter than I thought it would be

A good introduction to Ted Kurita but not much else to sink your teeth into.

Decent story, but more designed to fill the gaps in the storyline of the Combine. It moves quickly as if the author was trying to finish an unloved project. I'd say it is worth the read for any Battletech fan as it DOES fill in some gaps in the saga. Well performed. The narrator was great, but the story is filled with cheesey 80's-esque music and the sounds of futuristic battle (lasers going pew pew pew pew), and this is a huge distraction.

Originally got into these books in college. Are a good read for a pallet cleanser between more serious books!

I'd give it 5 stars if it wasn't abridged.

Combat and intrigue. Yes its full of it. It has Ninjas and Assassins. It all so is full of intrigue and politics. Don’t you just love books like this? I do. Give this ago it’s got a good story and you can also get right into the feel of the book with the sound effects.