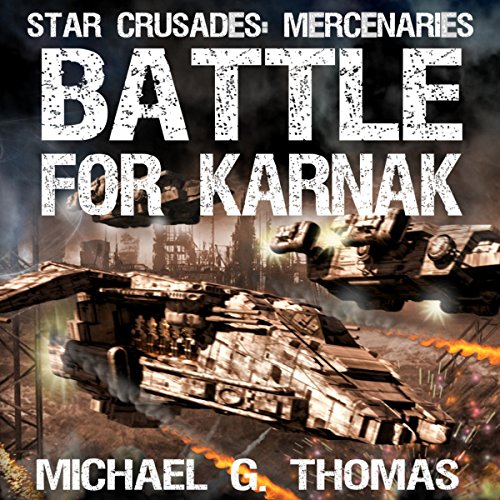 Battle for Karnak is the fourth book in the best-selling series Star Crusades: Mercenaries.

Karnak is a battleground, a planet torn apart by a dozen warring factions. Spartan and his small band of mercenaries and militia have won battle after battle. Now they must prepare for their final test, an assault on the heavily defended enemy capital, Montu. The plan is torn apart when a huge fleet of reinforcements appears. A fleet that threatens to overwhelm the valiant rebels.

With time running out, Spartan and Khan receive orders to create a mass uprising in the occupied cities of the South. The aim is to pin down massive numbers of the enemy's forces to enable a final desperate assault against the virtually impregnable capital. Spartan has other plans. With the Blood Pack of Jotnar, together with an assortment of mercenaries, robotic machines, and militia, he will take the fight to the enemy in his own particular style and end the war in a single apocalyptic campaign. The real Battle for Karnak has just begun!

What listeners say about Battle for Karnak

I received a free review copy of this book and am voluntarily leaving a review, Found this book to be to my liking and would and have recommended to some of my friends.

So this book seems to be a good middle book. You know there was story before it and you know there is definitely more story to come.

Although I really don't like starting a series after book 1, I started the series here at book 4 for a couple of reasons...
First, I have rarely had good luck with enjoying a series when the narrator changes.
Second, I enjoyed Daniel F. Purcell's narration of the first book in the Prey series so much I figured I would just start this series where he does.

As usual Daniel does a great job making the characters come to life and bringing the reader into this universe.

The story is definitely a continuation and not having read the previous books in this series I would be an a++hole to review it as a stand alone book. So looking at this as "The Empire Strikes Back" and not "A New Hope" this book was pretty good. I'll need to continue with the series to get into the characters more and to be more invested, so I'm looking forward to it.

If you like space Opera and battle scenes you're going to enjoy this story.