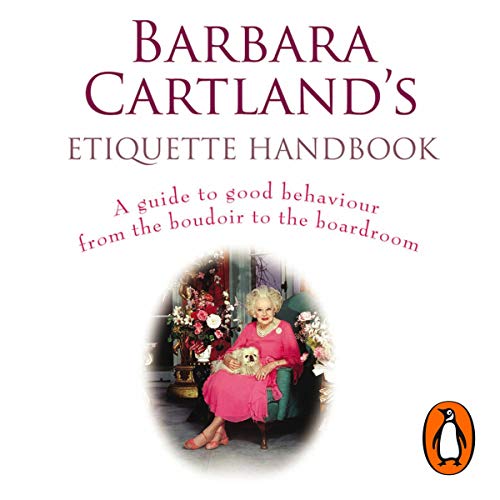 By: Barbara Cartland
Narrated by: Patricia Gallimore
Try for £0.00

For the record, the word "parlour" is not used, nor is the relatively recent insidious "lounge", except about airports, hotels and liners.' 'Boys should be taught at a very early age - six or seven - to say "Sir" to an older man.' 'When there are servants, the plates for the first course are never put on the table until everyone is seated.'' I cannot stress too often that on every formal occasion, whether it is Luncheon, a Bazaar or a Meeting, a hat should be worn.'

Written nearly 50 years ago, Barbara Cartland's Etiquette Handbook conjures up a period when addressing work colleagues by their first names was frowned upon, wives could expect to receive a weekly allowance of five shillings from their husbands, and hats were ubiquitous.

Laced throughout with Barbara Cartland's wit and wisdom, and Francis Marshall's illustrations, this is a wonderfully evocative insight into the manners of an England that has largely disappeared.

I read this book last year. Not only was it a real eye-opener to how life was lived by the well-heeled in the early 1960's, but it took me back to a world I remember as a child. I read the book with Miss Cartland's voice in my head, but was very disappointed with the choice of narrator for the audiobook. She's just not 'grand' enough.