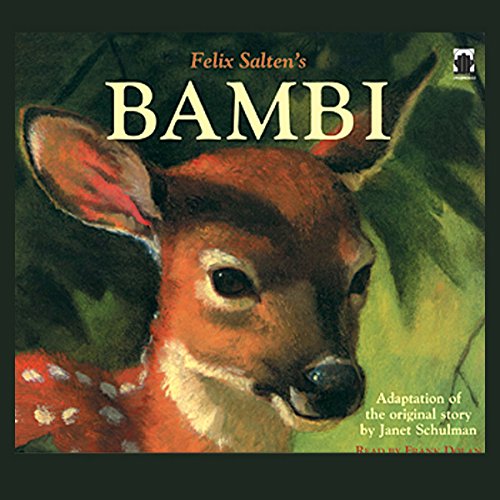 By: Felix Salten,Janet Schulman
Narrated by: Frank Dolan
Try for £0.00

Originally published in 1923, Felix Salten's Bambi is adapted here by Janet Schulman. Perhaps the first "ecological" novel ever written, Bambi has become for everyone a glimpse into forest life with all its enchantment and perils.

Listeners of all ages will be transported to a forest glade as actor Frank Dolan creates this magical listening experience of a beloved story.

What listeners say about Bambi

An abridged version of Bambi

This is an "unabridged" recording of an abridged version of the book. The title is a bit misleading. This is rather unfortunate as most of the powerful imagery was stripped out of this version. This version is closer to the Disney version in tone due to the missing parts. The violent disturbing imagery and the deeper philosophical dialogue that gave the true book its impact and tone have been eliminated. Basically a book suitable for adults has been turned into a children's storybook in this version. It's nowhere near as bad as the Disney adaptation, however.
I highly recommend reading the original version of the book. It is a truly haunting and beautiful masterpeice of fiction. This recording is anything but that.

This is NOT an unabridged story. Very, very disappointed. Though I should have figured that out with the short length. But the word "unabridged" should not be attached to this story, as it is not the original!

Love the story not so much the narrator.

Frank Dolan did a pretty good job but the voice did put me to sleep a little bit. It’s good if you’re trying to go to sleep which I found quite nice but not so great during the day. Overall I liked it to fall asleep to, but I don’t love listening to it during the day, I gave it five stars because I’m in a good mood and because I usually listen during the night anyway. (I don’t want this to get too long so this’ll be the end).

A fine story to share with children of early school age. it inspires meaningful conversations about life and love and kindness.

they took out so much, it's ridiculous. can't believe I wasted my money on this.

my boys 6 and 4 listen to Bambi before bedtime, it captures their attention and they said its a 5 star. It has background music throughout, which I thoight was a little loud. This audio book gives my voice a nice break.

First, I read the unabridged Felix Salten BAMBI in 1954.
It was 1 1/2 " thick. It took me 3 days to read, NOT 47 min.
There was much more to the story than this "green" shallow story pawned off by Disney, much later on. There was much more dialogue, interaction between The Great Stag and Bambi. Very disappointing.

What was most disappointing about Felix Salten and Janet Schulman ’s story?

Did the best she could with which she had before her

If you could play editor, what scene or scenes would you have cut from Bambi?

This books makes animation comes to life and is a wonderful listening experience for children. My son certainly did enjoy Bambi and I'm sure others will too.

Good for children and adults

An abridge of Felix Salten and unabridged of Janet Schulman version, is my major complaint. Now that aside I love Bambi. It is not what Walt depicted. To me it is an alagory of the time that it was written. It was published in 1929, the author was European. They are already in the Great Depression. Who is the "Hunter"? Do the Leaves depict the fall of the stock market? There is much wisdom here.