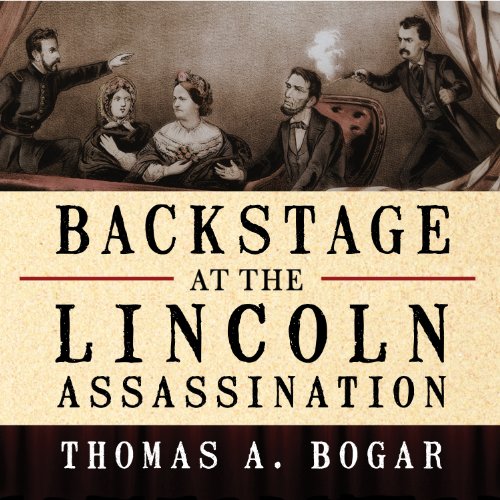 Backstage at the Lincoln Assassination

The Untold Story of the Actors and Stagehands at Ford's Theatre
By: Thomas A. Bogar
Narrated by: R. C. Bray
Length: 9 hrs and 52 mins
Categories: History, American
4.5 out of 5 stars 4.5 (2 ratings)

Backstage at the Lincoln Assassination

April 14, 1865. A famous actor pulls a trigger in the presidential balcony, leaps to the stage, and escapes, as the president lies fatally wounded. In the panic that follows, forty-six terrified people scatter in and around Ford's Theater as soldiers take up stations by the doors and the audience surges into the streets chanting, "Burn the place down!"

This is the untold story of Lincoln's assassination: The forty-six stage hands, actors, and theater workers on hand for the bewildering events in the theater that night, and what each of them witnessed in the chaos-streaked hours before John Wilkes Booth was discovered to be the culprit.

In Backstage at the Lincoln Assassination, historian Thomas A. Bogar delves into previously unpublished sources to tell the story of Lincoln's assassination from behind the curtain, and the tale is shocking. Police rounded up and arrested dozens of innocent people, wasting time that allowed the real culprit to get further away. Some closely connected to John Wilkes Booth were not even questioned, while innocent witnesses were relentlessly pursued. Booth was more connected with the production than you might have known - learn how he knew each member of the cast and crew, which was a hotbed of secessionist resentment. Backstage at the Lincoln Assassination also tells the story of what happened to each of these witnesses to history after the investigation was over - and how each one lived their lives after seeing one of America's greatest presidents shot dead without warning.

"Dr. Bogar's scholarship is original and impeccable. With stunning clarity, this vivid narrative shines a light into the shadows and behind the scenes of the most resonant crime in American history. Backstage at the Lincoln Assassination is an indispensable resource for understanding the width, breadth and scope of the tragedy at Ford's Theatre." (Erik Jendresen, writer/producer of Killing Lincoln and Band of Brothers)

Stars of an Unrehearsed Impromptu Drama

Would you listen to Backstage at the Lincoln Assassination again? Why?

Yes, to refresh my memory several years later. I listened and absorbed the general flow of information without following too many of the second-tier characters. I'd listen again to really focus on specific characters' reactions and futures.

This is a meticulously researched story about the four dozen or so actors, stagehands and other theatre employees who stepped into history 150 years ago when they were present the night that one of their own assassinated a (literally) sitting president. Their lives were forever changed - first by specific accusations against some and general accusations about the acting profession, and later by their memories (some not so specific) decades later. The author had to have spent years tracking down stories about, writings of and first-hand impression of these unsuspecting characters.

What made the experience of listening to Backstage at the Lincoln Assassination the most enjoyable?

Learning how the action of John Wilkes Booth affected the lives of the other Ford Theater actors.

What other book might you compare Backstage at the Lincoln Assassination to and why?

Which character – as performed by R. C. Bray – was your favorite?

It was a monologue performed by R.C. Bray who is my favorite narrator.

Booth's killing of President Lincoln affected the lives of the other Ford Theater actors more than you can believe.

Go check out R.C. Bray on Audible in the search box. Everything he does is great!