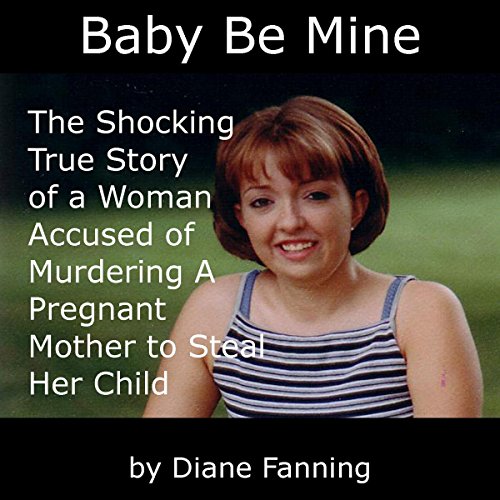 The Shocking True Story of a Woman Who Murdered a Pregnant Mother to Steal Her Child
By: Diane Fanning
Narrated by: Shelley M. Johnson
Length: 7 hrs and 12 mins
Categories: Non-fiction, True Crime
3 out of 5 stars 3.0 (2 ratings)

Lisa Montgomery presented her husband, Kevin, with their newborn baby girl, while a state way, police were investigating the brutal murder of 23-year-old Bobbie Jo Stinnett. She'd been found lying in a pool of blood, and investigators soon realized that someone had strangled Bobbie Jo to death, then cut the fetus from her womb. When they found Bobbie Jo's baby in Lisa's arms, they knew who was responsible for this grisly murder.

Background information in this book includes other caesarean abduction cases; a history of crime in Northwest Missouri in general and Skidmore in particular with a glimpse at the infamous Ken McElroy; plus a look at the recent Stinnett family victims like Branson Perry, whose disappearance and suspected murder remains an unsolved case.

Diane Fanning is the author of the Edgar Award finalist Written in Blood: A True Story of Murder and a Deadly 16-Year-Old Secret That Tore a Family Apart. Her other works of true crime include the bestseller Mommy's Little Girl, A Poisoned Passion, The Pastor's Wife, Gone Forever, and Through the Window. She is also the author of the Lucinda Pierce Mysteries: The Trophy Exchange, Punish the Deed, Mistaken Identity, Twisted Reason, and False Front. She has been featured on 48 Hours, 20/20, Court TV, The Today Show and the Discovery Channel, and has been interviewed on dozens of radio stations coast to coast. Her books are sold throughout the English-speaking world, including the UK and Australia, and there are more than half a million copies in print. Before becoming a writer, Fanning worked in advertising, and she earned more than 70 Addy Awards.

THIS BOOK IS ALL OVER THE PLACE! NOT A FAVORITE!

I really like Diane Fanning's true crime books. She writes about little known, lesser sensationalized events which mostly occurred post Y2K. I was sick of listening to audio rehashes by Ann Rule of murders from the 1970s and 1980s. I'd read all of her print versions when they were first published decades ago. There is just so much of Ted Bundy that one can handle, especially after he went out like a wuss when he was finally executed for a fraction of his actual serial murders.

Fanning always does a great job with research and due diligence in her accounts, although she can be a bit heavy-handed with trial testimony or trying to educate an already savvy audience on forensics and/or psychological criminal profiling. The problem I have with this book is that she felt that she had to recount every murder in Missouri where this crime happened to Caesarian abduction cases in the country. Then she digresses acutely to the disappearance of a relative of the murder victim and goes into an in depth investigation into a very sick Internet child pornography, sexual abduction, cannibalism, and sexual mutilation case. I almost threw up when she recounted the suspect boasting about "boiling and eating scrotum". TMI!!! Ewwwwwwww! It was a whole 'nother book - one I wouldn't have purchased! What does any of that have to do with the Caesarian murder of a mother and the abduction of her newborn? That is grisly enough.

There's nothing wrong with providing a back story but Fanning could have gotten FIVE more complete books from her work on this one. It makes the reader forget about the murder victim here, young mother Bobbie Jo Stinnett. The book details clearly states all of this in the synopsis but I didn't think Fanning would go so deep that I got bored in some places and skipped ahead. I had to STOP listening to the last 2 hours because I couldn't deal with a subject matter more disturbing than Jeffrey Dahmer!

The other thing that bothers me with all except one of Fanning's true crime audiobooks is the narrators chosen to present the accounts. All are female narrators and all are very competent. But the way they narrate such dark subjects is way too cavalier for me taste. They sound like they are reading the audio version of "Sex In The City". Dan John Miller's narration of Fanning's "Under Cover of Night" is closer to the mood for these tragedies, mostly against women.

Save your money! Full of fillers. :(

What disappointed you about Baby Be Mine?

While Dianne Fanning is a good author. She really missed her mark on this book. It had little to do with the victim Bobbi Jo. The life of the attacker is more profiled than the story of the victim. She detailed nearly every other crime in the town of Skidmore. Chapter upon chapter of another unrelated crime is detailed. Where did this book go wrong?! Book is full of fillers and disappointment. Hard to maintain focus without having to back up and listen again and again. If a book is to be written about Bobbi Jo Stinnett another author is going to have to write it.

Which character – as performed by Shelley M. Johnson – was your favorite?

The life of the victim was written so poorly. I found that since the life of Lisa Montgomery was much more detailed, so therefore more interesting - I'm sure that's not the angle the author desired but that's how it came out.

Disappointment and found myself losing focus. Dianne Fanning just did not deliver! :(

The best part of this book is the narrator. Shelley Johnson gets the five stars on this one!

The impact of this authors research and writing are diminished by the narration feeling like Mother Goose reading you true crime. The gravitas necessary for imparting this account is not suited to a voice that made you expect 'Oh no, cried Goldilocks! it's a bloodbath!' at every turn.

I was really looking forward to this story which was great when they would talk about it. And here's where my disappointment comes this book was like 80% about other stories not about the actual murder and abduction itself.. so it was ok

If you could sum up Baby Be Mine in three words, what would they be?

What does Shelley M. Johnson bring to the story that you wouldn’t experience if you just read the book?

Yes. Shelley handled some very challenging material and a grisly subject in a very articulate and dynamic manner. In spite of the terrible events she had to describe, she was able convey warmth, sincerity and tell the story in a way that made me want to listen. She has a melodic and very pleasing delivery.

Shelley is a very dynamic narrator. I look forward to listening to her again! I highly recommend her work.

Would you try another book from Diane Fanning and/or Shelley M. Johnson?

I would definitely try another book of Diane's if narrated by someone else.

Would you be willing to try another one of Shelley M. Johnson’s performances?

Ms. Johnson talks to the listener as if speaking to young children, over dramatizing the story in a very syrupy way.