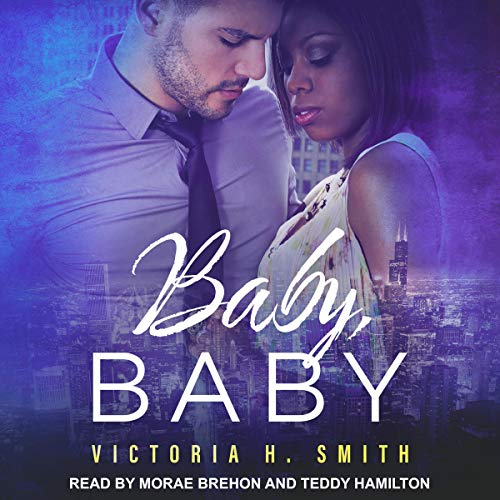 When I applied to medical school, I never thought I'd be paying the bill by becoming a surrogate. I suppose a girl has to do what she has to do in the end, so I decided to intercept Uncle Sam before he could come for me. Funny enough, it's surprisingly easy to find willing participants. I answered an ad, and the guy showed up at the coffeehouse we agreed to meet at. He showed up frickin'...beautiful and with brown eyes that tightened my tummy in ways they probably shouldn't have. He looks familiar to me. Like I've seen him on the news or in the paper or something.

And the last thing I should be doing is falling for the guy whose baby I volunteered to carry.

She's obviously here for someone else, agreed to meet someone else. About a baby? She wants to carry...my baby? Oddly, before the moment I met this woman, the thought had never really crossed my mind. I suppose the idea never had time to form considering I've just been cleared of cancer. I get the news right before I meet her. I meet her, and everything changes. I want a baby. I want another chance to lead a fulfilling life, and I want...her.

But how can I have them both?

Over the top soap opera drama for no reason

First...Im noticing a trend of giving the sample of the better or more known narrator and then they arent really involved. Teddy Hamilton narrates very very little of this. I have a love/hate thing for Ms Brehon. Her female voice is mostly awesome...even if sometimes over the top whisper dramatical...but her male voices are just bad. Hard to take seriously.

This overall story is pretty good actually. I think it might even read better than listen. I did struggle with this though. Jo is almost a whole doctor...and a black woman from a somewhat "hood". Her level of naive/stupid is hard to stomach. The things she does...the information she leaves out/lies about..as a medical professional..Cmon now..ForREAL? There are so many misunderstandings, bad decisions and angst that would be ok if they were fresh out of high school but for these 2 at this point in their lives is ridiculous. I do believe the narration makes these things seem worse than they may come across in actual print. Also the way all the breakups/makeups are so vaguely handled is kinda weird given there is always such a buildup.
So I dont know. Im irritated but I finished it . It could of been really great.

A love story filled with drama

The storyline probably one of the best, cheers to the author. I’m not going to lie, it did start slow and the female narrator wasn’t my favorite. But as the story continues, hopefully you will get used to it. ( I would prefer if the remade it with a different narrator, she don’t fit Jo). The male is prefect for Alexander. But overall, you can tell they do love each other and trying to figure things out. ( I had a regarding Alex and I wanted to cry lol) There not a lot of sex scene if you prefer, only 3 fill with emotion, raw and love

Looking For A Surprise

It was okay. I guess I just wanted more from the story. There were weird inconsistencies in the story written just to create conflict that I just couldn't look past. Not worth the credit FOR ME. I wanted something to happen to surprise me but it never happened.

This was my first time listening to this author. The storyline was decent and cute but the overall book was way too wordy. There was way too much fluff where there shouldn't have been. The female narrator made it more difficult to listen to, her over breathy expressions were annoying. Wasted credit!

Excellent book loved it! Both narrators are excellent as well!! They are like listening to old friends

WOW! Good but long Victoria H. Smith this is the first book of yours I read very interesting in some chapters you had me hooked I'm gonna read another one of your books 📚👌😯

I really wanted to like this book. I did. But the story was too descriptive in every little detail, movement, gesture, thought or supposition. This was amplified by the absolutely boring and monotone narration. I mostly gave it a two star due to the subject matter of surrogacy and the cancer survivor story.

Awesome Loving Beautiful Story, By Victoria H. Smith! I Recommend U Listening TonOb Audible Audio Ur Phone, Or Ur IPAD. A Beautiful Story Story, To Everyone’s To Looking Forward To, Ok!😘🤗🥰😁😁

Story was so funny when it first started; then starts the drama, pain, misunderstandings, love, and happiness. Male narrator was spot on; female narrator talked as if on edge or overly excited throughout the book. I’ve listened to her before and this is her style, and appropriate depending on the book. All and all a great story.

Love the male actor’s voice, the female actor was a bit too breathy. Great story can’t wait for part 2!!