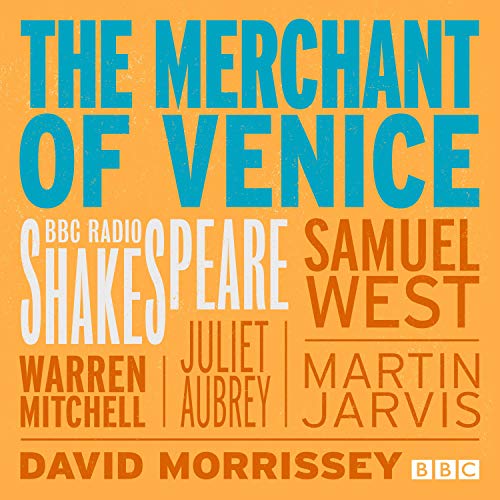 In this BBC full-cast production of The Merchant of Venice, love, bigotry, greed and justice are entwined.

Shakespeare's classic play explores the eternal themes of love and hate, mercy and justice, with parallel stories centred on the moneylender, Shylock, and the lovers, Portia and Bassanio. Shylock's angry insistence on the repayment of his debt from Bassanio ends in the Venetian courts, where he demands his pound of flesh. Portia meanwhile, a wealthy young Venetian woman, must marry one of her many suitors. Her late father's will has set the challenge by means of three caskets: one gold, one silver and one lead.

Warren Mitchell stars as Shylock, with Martin Jarvis as Antonio, Samuel West as Bassanio and Juliet Aubrey as Portia.

This superb production of Shakespeare's dramatic and complex play is directed by the award-winning Peter Kavanagh, and features specially-composed music by the renowned Barrington Pheloung.

BBC radio has a unique heritage when it comes to Shakespeare. Since 1923, when the newly-formed company broadcast its first full-length play, generations of actors and producers have honed and perfected the craft of making Shakespeare to be heard.

In this acclaimed BBC Radio Shakespeare series, each play is introduced by Richard Eyre, former Director of the Royal National Theatre. Revitalised, original and comprehensive, this is Shakespeare for the modern day.

What listeners say about The Merchant of Venice

This is excellent stuff- light, fast, convincing and fun. Well done to the BBC for playing it as a comedy and sliding nimbly over the moral issues. No one would argue that the attitude of the young Venetian men to Jews was a nice one- but the play needs them to be amusing company- not over blessed with brain, certainly, but young, active, in love and full of joie de vivre.

Warren Mitchell gives a thoroughly Jewish and nuanced Shylock- a comic villian with just the right edge of pathos, he really lives and breathes and burns with a growing lust for revenge. He manages the feat of growing worse and becoming more poigiant at the same time

Martin Jarvis is nicely balanced and not too self-pitying as Antonio- he is possibly a little bit too benevelent to carry off the hating of Shylock.

Samuel West (that gift to Shakespeare audio) is, of course, an excellent Bassiano- though I thought him a bit too short tempered- as if, perhaps, afraid to make a jew-hater sound too nice. Bassiano, surely, as the centre of affection in the play should be the personification of charm.

But the highlight of the recording as to be Juliet Aubrey as Portia- her marvellous low voice glides through Shakespeare's lines in a gloriously measured way- equally excellent in comedy scenes as in the court room- Oh she's marvellous, buy it just for her.

The one drawback is that they have abridged the play- not drastically, just slimmed it down here and there and changed the odd word- but it is very quick and charming and at the end one almost believes that even Shylock might live happily ever after.

This version is abridged.

such a shame that this version was abridged, as it was very well performed.

Wasn't sure when purchasing whether this was 'abridged' as it wasn't stated but having listened to it am fairly sure that it was. Completely unfamiliar with the play and enjoyed this intro - would now long to see a stage version

Clocking in at just over two hours, this BBC radio production of The Merchant of Venice flies by at a serious clip. On the plus side, there isn't much dead air, but on the minus, it takes away some of the drama by keeping the voice actors from incorporating pauses. The voice acting is mostly good, especially the actress voicing Portia, but it gets difficult to tell many of the characters apart. Unfortunately, the most memorable voices are also the most ludicrous and cartoonish. On the whole, however, the actors do their best under their constraints, and some very good work does shine through.

Listeners should be familiar with the play before listening to this, as it would be nearly impossible to follow without knowing what would be happening on stage. For fans of Shakespeare and this play in particular, this audio is a nice addition to your library, but it is no replacement for an actual performance.

Of course, the big question is how this performance treats Shylock, and it's a decent middle ground. Shylock isn't portrayed as a pure villain, but he also isn't portrayed as wholly sympathetic either. His exit is handled a little sloppily, giving the final act the play's trademark uncomfortableness, but it's certainly not the worst handling of Shylock out there.

Who am I to review Shakespeare?

Dramatized, and not bad. Not my favorite Shakespeare, but not bad.