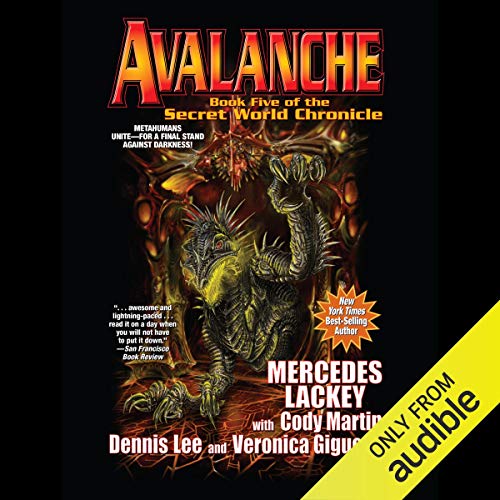 Ultima Thule has been destroyed - but somehow the Thulians mounted an even bigger force to destroy Metis. The Metisians who escaped the carnage and destruction of their secret city now must somehow find somewhere safe to go - without getting snapped up by various world governments. And now the Thulians have changed their tactics to “blitz guerrilla warfare”, sending wave after wave of their ships and troops to attack vulnerable targets all over Earth, with no clue for ECHO as to from where these things are coming.

John Murdock and the Seraphym have become a force of nature, but they can’t be everywhere at once, and if they were regarded with suspicion before, now they are regarded by ECHO’s allies with fear as well.

You could say “things can’t get worse.” You would be wrong. Red Djinni’s past is about to catch up with him. So is Victoria Victrix’s.

What listeners say about Avalanche

love the 4 previous books, hate giving negative reviews but i guess too much time passed between those and this last one....this was just bad. majority of book is about the least likeable character (john) which has now become more self righteous, rather than just the prick he was.
also massive continuity errors. over all, this was just a conclusion to the story and not a desire to build or better it.

Well, it is a conclusion

Avalanche brings the secret world Chronicles to an end with even less continuity editing than previous books.

The overall story is okay, with get drama interpersonal problems and resolutions. We get good guys and bad guys and even an epic fight against overwhelming odds. What we don't get is the sense of impending danger. I don't mean doubting they will win, we know they will, we want then to win, but in a story of heroes and grand gestures, there should be great sacrifices, and that just isn't them. Don't bother pointing at the places where the writers try to trick us into thinking people are making sacrifices, if you've read the whole book, you know they didn't.

A writer's job is to make me worry about the characters when they are kidnapped, I shou.d fear for the consequences, and that should be even more true in a book with a cast of dozens. Anyone should be at risk, since there are other characters to pick up the narration. So why is that nowhere in a book written by masters of their craft?

This book, more than the others in the series, feels like someone was rummaging in a box is stories miss Lackey wrote with some friend to have fun, and decided to publish it without running it by an editor first. Writers can write stories like this, but it's a publisher's job the ensure we don't end up reading a first draft of a story.

so much time was put into developing these characters. loved jm, victrix, nat, red, and the rest. only small issue was a cpl characters i wished would've been featured more like red devil and his gf shackti, and a bit more on kanjar, harmony, scope, merc, corbie, Jamaican blaze, and pride (whom were hardly mentioned in final fight) nor maltu and matai, wasn't sure if they were still alive in the last book. Also the cccp energy boost or drain girl, what happened to her. obviously too many characters that it was hard to keep up but loved the great ending and wish xxx would've lived to see it.

Loved it from the first book.

I started this series on accident while looking for items on YouTube. They had a free audio of the first book. I fell in love with it the first 30 minutes. After that I bought the next 2 and had to wait for the last 2 to come out. It was worth it. I hope there will be more from this Universe.

The title says it all. This series is a must for anyone who likes a Sci-Fi Soap Operaish type. The multiple story lines and surprises will entertain for sure.