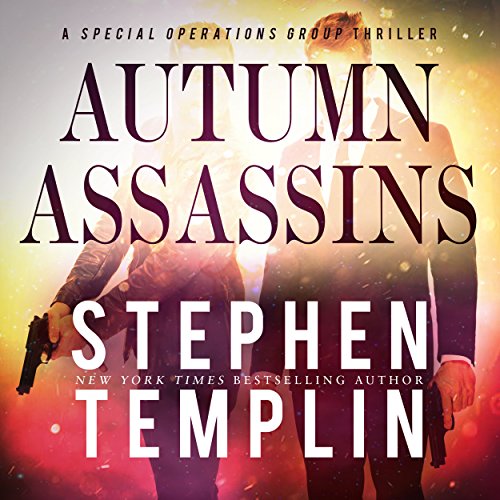 CIA's Max Wayne (formerly of SEAL Team Six) and his brother Tom (a former Army Ranger) are bound by blood to execute the highest threat missions that the United States denies. When their father (a Force Recon Marine vet), also working for the Agency, is captured by the Chinese, Max and Tom must find him before he is executed. In their search, the brothers discover a stolen biological weapon and a rogue Chinese special operator leading a clandestine strike against America. Max and Tom must stop the rogue operator and his team before they assassinate top US military leaders. If the brothers fail, China will be free to take over the Indo-Asia-Pacific region.

enjoyed the story butthere were too many he said, she said statements for my liking. this would make a decent film though

Where does Autumn Assassins rank among all the audiobooks you’ve listened to so far?

This book ranks in my top 20 reads so far this year.

I was on the edge of my seat throughout the book. The chase scenes were very intense.

Have you listened to any of Brian Troxell’s other performances before? How does this one compare?

I enjoy Brian's performances very much. I haven't read one I haven't liked.

I would have read this in one sitting if I had started it earlier in the day.

I look forward to the next book in the series.

this is the third book I have read from Stephen templin he does a great job!!!!

very good but a bit slow at times

very much enjoyed this book. character development was good. The story was pretty well written but was a bit slow at times. overall a pretty good book and a good performance as well by the narrator.

Templin is improving. Troxell brings his characters to life, each in their own voice.
With a large Asian cast, Troxell avoids the easy chopsocky caricatures. The two brothers are each fleshed out well by both writer and reader. It would have been easy to make the tough, gruff Max or the sensitive Tom the hero, but both are played as equals.

This is NOT about Sonny, Chris, and Hannah.

I was disappointed to find this third book is about a completely unrelated group of protagonists. I gave it a shot anyway, knowing I enjoyed the author's first two books.

This book, however, was not very good. The plot was full of holes and the two main characters, who were brothers, were lame. Their banter towards each other was full of 12-year-old humor. The romantic subplot was forced and predictable.

Too much fictitious content. A lot of contrived story.

Would you ever listen to anything by Stephen Templin again?

The different voices were ridiculous.

Predictable and a little too cheesy..

This book reminded me of watching a budget action movie, without much depth and plot.
The narrator tries his best, but the dialogue is broken, especially during the action scenes.
The author keeps the characters superficial and you never get to understand them, besides their present tasks.
All in all a disappointing listen.

This is my first book by Stephen Templin, and I'm not sure I'll try another one soon.