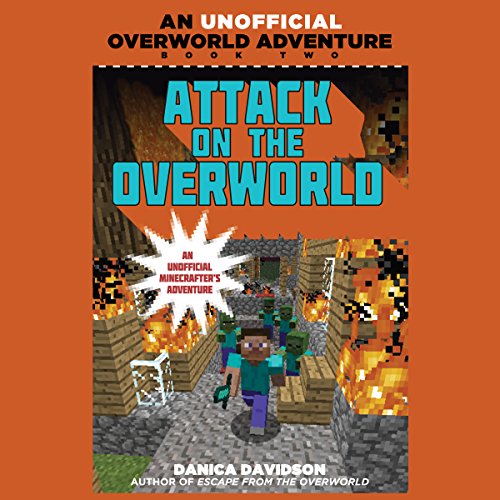 Attack on the Overworld

Attack on the Overworld

Stevie and Maison have a great friendship where they travel back and forth between the Overworld and the human world. Maison has earned some fame for battling off the mobs at her school, but the attention has also brought about cyberbullies DestinyIsChoice123 and TheVampireDragon555, who have hacked her computer and discovered the portal! Now, through complex coding, the cyberbullies have turned the Overworld into eternal night and unleashed a pack of zombies, allowing their griefing to reach a whole new level.

Things become even worse when DestinyIsChoice123 and TheVampireDragon555 are bitten and turn into zombies themselves. Because they're human and not Minecraft characters, they have all the powers of zombies while retaining their intelligence, creating a new breed of zombies. TheVampireDragon555 is even able to control and rule over the zombies, letting him raise his own army.

Stevie and Maison run for the village to warn everyone, but it's too late: All the villagers have been turned into zombies. In the midst of the eternal night, they'll have to fight off zombies and find supplies to make potions to save the villagers and the Overworld.

Note: While this is Book 2 in the series, it works just fine as a stand alone story. Also, you don’t have to be a Minecraft fan to enjoy this tale.

Maison and Stevie return for another adventure! Though, admittedly, this isn’t one either signed up for. While Maison is visiting Stevie in the Overworld, she realizes her computer was hacked by some cyberbullies and they are most definitely up to no good! Destiny and her cousin wreak zombie havoc in Stevie’s home village.

This was quite a bit of fun and I liked it a little better than Book 1. The stakes were higher as people Stevie knows and cares about are turned into zombies by the bully TheVampireDragon555, who I will just call Vampire Dragon. It was both funny and a little disturbing for Maison and Stevie that Vampire Dragon was turned into a thinking angry zombie. Yep, you got that right – a Vampire Dragon zombie loose in the Overworld! Cue evil laughter!

I liked that the cyberbullying issue wasn’t a simple thing in this tale. Davidson does a great job of showing multiple facets to this real-life problem. Through the characters of Destiny and Vampire Dragon, she shows us a few reasons why bullies do what they do. Then through Maison and Stevie she shows what those targeted by the bullies can do. Sometimes it takes a few choice kind words and sometimes greater actions, perhaps using a sword, are needed.

While there is an obvious underlying message about bullying, the story works really well in the action and plot department. Maison really shines as a character as she feels very responsible for the bullies making their way into the Overworld and yet she doesn’t give up hope in saving the zombified villagers. She also has to make a leap of trust that could turn the tide one way or another.

Over all, it was a fun listen and makes me want to check out Minecraft and see what adventures I could go on.

The Narration: Dan Woren is the perfect vampire dragon zombie! His voice for that character was excellent – a bit raspy, a bit evil, and a bit wannabe ruler of the world. I loved it! His character voices were all distinct and his female voices were definitely feminine. He sounds totally engaged in the plot as well, easily pulling off all the emotions the characters go through.

I stayed up till 11pm

Me and my brother were listening to it at night I think he went to bed at chapter two. I thought this book was funny! I listend to the whole collection and so far this one's the best one yet! I love this collection! There are more coming