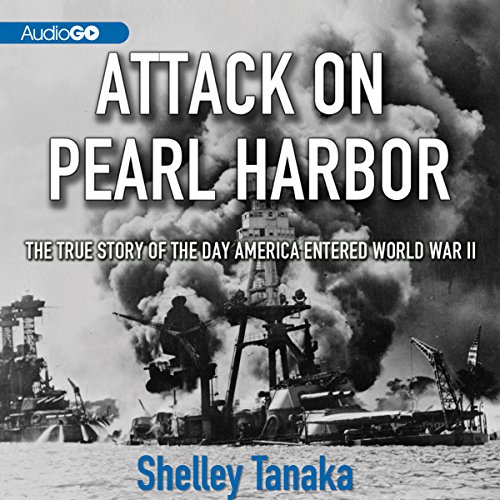 By: Shelley Tanaka
Narrated by: Charles Carroll
Try for £0.00

As eleven-year-old Peter Nottage stood in the yard, watching in disbelief, a group of Japanese fighter planes swooped down, spraying machine-gun fire across the water. Then the first bomb dropped - and in minutes, Kaneohe Bay was a sea of smoke and flames. To the south, at Pearl Harbor, the huge ships of the American fleet were ablaze. This was no drill. This was war! Through vivid eyewitness accounts, Attack on Pearl Harbor re-creates the dramatic moments of the unforgettable day that America entered World War II.

What listeners say about Attack on Pearl Harbor

This is an excellent book for children or even adults to get an introduction to what happened at Pearl Harbor and what propelled the United States into entering World War II. It would make an excellent home school tool as well, aiding parents and children in coming up with discussion points on what it must have felt like to be in Hawaii when the Japanese attacked. Great audio short!

My children and I enjoyed listening to this. The story itself and the narrators voice kept us enthralled.

Almost Felt As If I Were There.. Glad I Wasn't!

This was a really good short narration of the days that led up to America entering into World War II following the attacks by the Japanese on Pearl Harbor.

The author did an excellent job on really helping me to feel as if I was actually there! (not that I wished I were there!)