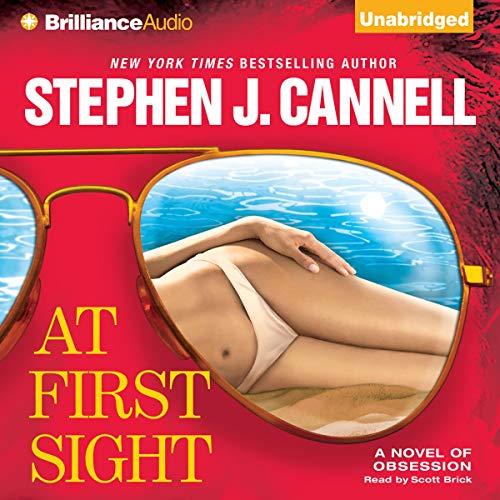 Evelyn is good at spending Chick's money, money that has pretty much run out. His other personal possession is his drug-addled 16-year-old daughter, Melissa. Though concerned about his life and family, Chick resigns himself to a miserable state of acceptance.

That is, until he, Evelyn, and Melissa take a Christmas vacation in Maui. With this, Chick's life changes. He experiences unrequited love at first sight when he observes Paige Ellis. His obsession, exceeded only by his need to possess her, isn't diminished when he learns that she is happily married. Instead, he befriends Paige and her near-perfect husband, Chandler.

A short time later, Chick's obsession compels him to drive to Paige's house, where he runs down and kills Chandler in a drug-store parking lot. He attends the husband's funeral, feigning compassion for Paige. Several months later, with his lust for Paige in high gear, Chick stages a carjacking and murders Evelyn. Evidence that Chick has planted in and around the car implicates an ex-convict.

When he calls Paige with the news of Evelyn's murder, she returns the favor and comes to comfort Chick in what she thinks is his time of need. Chick, however, has other ideas. Will Paige learn the truth before it's too late?

Based on the book description, I was optimistic that it would be at least an entertaining story. However, when the protagonist commits a reprehensible crime, I lost all interest. There is nothing 'sympathetic' about this character, and I ceased to care about him. The author's forward mentioned that his publisher/agent advised against publishing this book, and I must agree with them.

If you’ve listened to books by Stephen J. Cannell before, how does this one compare?

He brings the books to life.

Not enough suspense and too many details upfront

I liked the way the character kept trying to get to the girl.

What was most disappointing about Stephen J. Cannell’s story?

I could not bring myself to finish this book after about an hour into it. I typically love works by this author, but I could not listen any further. The characters had no likable qualities. I felt like I had stepped back a few decades and was reading the screenplay of "10." Maybe there is a worthwhile story in there somewhere, I couldn't get to it....

protagonist??? not in my book

worried about them now. I need to LIKE the protagonist. doesn't mean they have to be perfect, but must have some redeeming qualities. I could't listen to this book because i couldn't stand the protagonist.

He just had to write it

I have read other Cannell books and loved them. He is a talented author, Which is why I chose this one. Cannell says in the beginning he wanted to write this for years. I can't imagine why. The story was tedious and the characters were extremely unlikeable. I had to fight to finish it. Yulk. As for Brick, as others have said, he could read the phone book and I would buy it!

What disappointed you about At First Sight?

Telling the story from two points of view might have worked better if they had been used evenly. The vast majority of the story is told by the antagonist at the beginning, and the protagonist doesn't beginning telling that side of the story until much later. The antagonist was shallow and unlikable, so this lopsided approach had me spending too much time evaluating whether I should even keep reading.

Has At First Sight turned you off from other books in this genre?

Not at all. I will also read other Cannell books. Based on the foreword, I think this was a fluke.

Scott Brick was actually a good choice. He did condescending and snobbish very well.

Surprise and anger at the antagonist's world views. The stereotypes he perpetuated had my eyes rolling. I almost stopped listening after hearing him describe a black man's 'ghetto accent'. Ugh.

What a twisted dark ride!

I loved it. Some stories you listen too leave your mind wandering off during slow periods; this story really kept my attention. It was a unique approach of telling the story through the antaganists view point. When it starts you believe Chic Best who is the main character is the protagonsit and you start off liking him and pulling for him. As the story progress and his life and plans really start pulling apart you feel for him at first but by the end you really learn his true nature. I listen while riding to and from work and I found myself anxious to get back to the book to hear what would happen next.

Stephen J. Cannell is the best!

I'm never unhappy with a Stephen J. Cannell book, and this one doesn't disappoint! As usual, Scott Brick does a wonderful job. He's the true voice. of Cannell. This story was so compelling that I could hardly stop listening. One of his best!

I have great admiration for the late Mr. Cannell. As a man who suffered from dyslexia, the fact that he created dozens of TV shows and many novels is admirable.

The premise of the story was fascinating to me, and it was interesting to see it from the perspectives of two distinct characters.

My only real beef is with the structure. The fact that each character's perspective is told from both first and third person is illogical, and it is especially confusing when they are together. When Chick's actions are described in the third person, there is no way of knowing if it's his perspective, or if it's Paige telling us what she sees him do.

The narrator, Scott Brick, was brilliant, and every time I come across his name when browsing a book that seems interesting, I feel lucky to know that if I buy it I'll get to enjoy his voice again.
Mr. Brick's voice is captivating, and to me he is one with the protagonist.

That is why, in my opinion, there should have been at least 2 voice actors, just like, for example, in Gone Girl.
Sure, it's easy for me to tell other people they must hire a second actor for a book (it's not coming out of my pocket), but in this case I think the story called for it.
And yet, Brick did a wonderful job, even on his own.

Another issue that comes to mind is the political and personal choices of the author.
In many stories one side of the aisle is presented as humane and the other side as vermin.
Cannell, who was a conservative, has given us sympathetic characters from each side of the aisle. That is something we need to see more often.