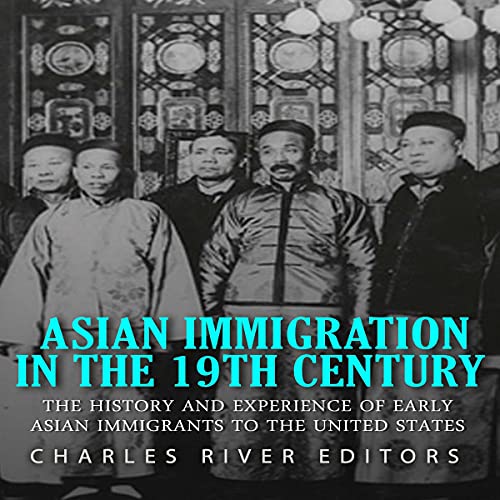 Asian Immigration in the 19th Century

One of the most important and memorable events of the United States’ westward push across the frontier came with the discovery of gold in the lands that became California in January 1848. Located thousands of miles away from the country’s power centers on the East Coast at the time, the announcement came a month before the Mexican-American War had ended. Among the very few Americans who were near the region at the time, many of them were army soldiers who were participating in the war and garrisoned there. San Francisco was still best known for being a Spanish military and missionary outpost during the colonial era, and only a few hundred called it home. Mexico’s independence, and its possession of those lands, had come only a generation earlier.

While the Forty-Niners are often remembered for panning gold out of mountain streams, it required advanced mining technology for most to make a fortune. Nevertheless, the California Gold Rush became an emblem of the American Dream and the notion that Americans could obtain untold fortunes regardless of their previous social status. As historian H.W. Brands said of the impact the gold rush had on Americans at the time, "the old American Dream...was the dream of the Puritans, of Benjamin Franklin’s “Poor Richard”... of men and women content to accumulate their modest fortunes a little at a time, year by year by year. The new dream was the dream of instant wealth, won in a twinkling by audacity and good luck... [it] became a prominent part of the American psyche only after Sutter’s Mill.”

While the gold rush may not have made every Forty-Niner rich, the events still continue to influence the country’s collective mentality. The flow of Chinese immigrants increased dramatically in 1852, sparked in large part by a crop failure in southern China that caused the custom houses in San Francisco to swell with 20,026 Chinese arrivals. Even more Chinese came as news reached China about the apparent ease of mining in California. By the end of the decade, half of the population of the Southern Mines consisted of Chinese miners.  Chinese miners would become known as the most industrious and tireless of the miners, finding gold in claims that previous owners had thought depleted and persisting in mining an area far longer than others who eventually left the fields altogether.

In many ways, this represented the start of an influx of immigrants coming from Asia to the United States, kicking off an often turbulent relationship and history that would lead to alienation, conflicts, immigration quotas, and more. This book looks at that history from the start and how it affected those who came from Asia in the 19th century.

What listeners say about Asian Immigration in the 19th Century