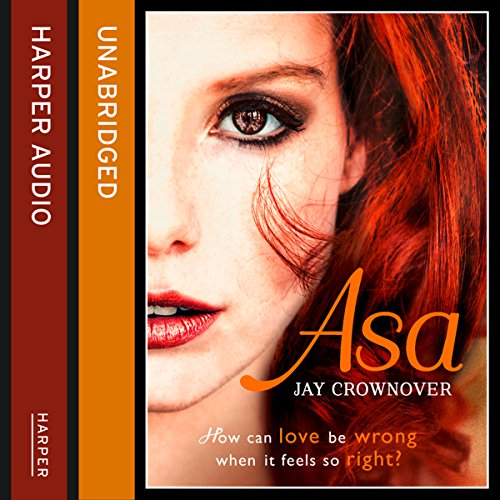 By: Jay Crownover
Narrated by: Christian Fox
Try for £0.00

Royal Hastings has been a cop, first and foremost, for most of her adult life. When a call-out goes wrong and her partner ends up in hospital, she finds herself suspended from the job indefinitely. With too much time on her hands and a heavy load of guilt weighing her down, she seeks solace in oblivion - otherwise known as a golden-eyed bartender with a rap sheet as long as her arm.

Asa Cross has spent his life on the wrong side of the law, but a near-death experience has left him rebuilding his life and relationships. But being good is tougher than it seems - especially when being bad looks as good as Royal does.

On paper the cop and the con seemed doomed to heartbreak - but when love has stolen your heart, how can you walk away?

What listeners say about Asa

This woman is so self-centred, so shallow and so naive that's it was haltingly obvious I had to stop the book as she was making me sick. She wants to use Asa, to fly his "flesh-suit" for fun, not even contemplating for a second the walls and barriers erected by him, and his fair warnings to her on more than one occasion based on his awful experiences and deeds in his past, not to breach his ramparts; and still she just wants to take, not caring for his soul for a second, just his temporary hard places and she is a cop, pledged to "protect and serve"! If it said Poison on the bottle, she was desperate to drink it. Doesn't no means no whether from a female to a male or vice versa?

The children's story book tone of the female narrator was horrible, and no matter how lovely Mr Fox's (Zach Villa) voice is, I gave up on this book with more than 6hrs to go. HORRIBLE

This book really tied up the series by the end although it is my least favourite of the series. There are some points where it drags a little but all of these books are amazing and I was really disappointed I had finished them. Thank goodness the Saints of Denver series is next

The cop and the criminal! Loved this book so much, which surprised me as Asa wasn't one of my favourite characters in previous books. Asa proves himself as being one of the most adorable and charming of the leading men. Royal falls for Asa's Southern charm even though she knows she shouldn't. Asa repeatedly turns down her advances, eventually though Royal's persistence finally pays off. Their relationship is torn apart by a very unfortunate secret. Can their love come through in the end? A wonderful story, that again gives us insight into all The Marked Men and their families. Very sad it's the last in the series.

Sorry the series has ended.

I love the way that each book follows on from each in other chronologically, but we get to hear the intricate stories of each of the marked men and their ladies. I have found myself listening to the books way past my bed time as I had to find out what happened next. I have thoroughly enjoyed the series and sorry it has come to an end.

Loved it!
Just as good in sounds it was whenI read it.
Great story and Asa and Royal sleighed me. Sad to see the Marked Men come to an end !

A perfect finale to an outstanding series

Asa and Royal's story is now one of my favourites. Full of heart, angst & forgiveness. The performances by both Christian and Kendall were spot on but I particularly loved Christians southern drawl. This series has been well written and excellently performed by all the audio artists I can't recommend enough.