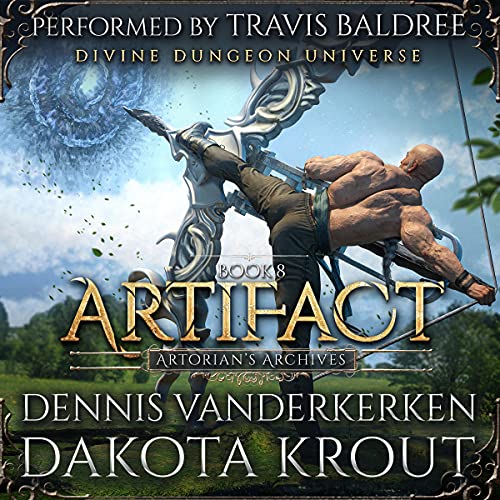 By: Dennis Vanderkerken,Dakota Krout
Narrated by: Travis Baldree
Try for £0.00

Artorian has seen better days. Chased by demons, hunted by the Red Inkquisition, on the run as a fugitive...and he’s spent barely any time in Eternia. Stuck as a tiny noodle dragon and formed into a crown to decorate the heads of Nobility, he is forced to rely on his friends instead of fixing the issues of the world himself.

Luckily for everyone else, the plucky grandfather does not know how to quit. If all Artorian can do is wiggle, then he will wiggle fiercely! By unearthing the secrets of the deity system, he’ll find what it takes to make the true tools of victory.

What listeners say about Artifact

The references and the awesome shenegaigans makes this book one of IF NOT the best entry into the serie as of yet. Having great thorwbacks to the early AA and DD is Hella awesome and makes the story flow.

To me, the story is being stretched and stretched with no end in sight. Two books ago it became a chore to plow through the story. His beginning was great fun and enjoyable, but the whole time in CAL keeps dragging on.
I expected a book or two creating a transition to the Ritualist, not a neverending eternity of solving bugs and perfecting a world. I wanted to get references i could use in the Ritualist, not more and more content that still feels like there are too many loose threads. I was willing to brave this book because I thought it might be the last book... Surprise surprise, it wasn't.

I love this series. If you haven’t read or listened to this series I recommend starting from the beginning as this book will just sound nuts. But if you are reading this review, then chances are you are well versed in the shenanigans of love by now. Travis Baldree does a great job of bringing Dennis Vanderkerken’s characters to life as always and I look forward to the next book!

well worth your time

another wonderful adventimer with sw0ltorian, everyone's favorite pillow loving grandfather figure. lots of recurring characters we all know (whether we love them or hate the.), shout outs to discord peeps, easter eggs from other mdp stuff, references to memes or pop culture, and inside jokes. wonderful character development even with in one book much less from one book to the next and this installment is no exception. This story boasts some expansive world building that slowly pulls back more and more on the world as you along. good prose, the sentences flow beautifully while providing imagery that paints the picture well in the minds eye no matter if it is a high action scene or a simple sit down convo between characters. great story premise and execution. smooth clear defined stages between set up, rising action, climax and resolution with plenty loose threads that leave you wanting more. this author knows how pull you in, get you to empathize and then when you least expect it he goes in for the kill, illiciting emotions in the reader in ways that allow one a new perspective on events that may have clearly been seen in one light but now are seen in contrasting ways, posing interesting philosophical queries in ways even non philosophers are left thinking about the matter.
narrator performed admirably, he has clear and concise enunciation. the narrator has an Excellent pacing, wonderful vocal range and accent mimicry easily able to give each character their own distinct voice while bringing them to life by clearly conveying the emotion within the text. all around wonderful I look forward to the next installment

The plotting is weak, the character un challenged, the jokes forced... The characters I loved brought me this far, but I think I'm done... No more of this branch artorians archives for me

In desperate need of an editor

It shows that there is little to no editing work on this book (from it's speedy release to it's lack of a plot). The book, while still a good listen suffers from a "and then this happened" writing style, you can't predict what happens in the next chapter, not because of lack of understanding the story, but because there are so many randomly added interactions with characters that only show up for a chapter or 2 (and only if they're special).

In addition there are 2 characters with basically the same name Sunny and Sonny and the narrator pronounces them the same making it very difficult to follow some conversations. The whole Artorian does this awesome ability, then has the ability is alerted on following use is getting really old and feels more like a way for the author to cut corners.

This series is starting to drag-on, but it's still salvageable, just needs a strong editor and more focus on a plot.

Amazing series only keeps bringing more with each addition. The story and voice acting are absolutely some of the best.

I know a few people have posted how bored they're getting of the author, but I just love living in this fantastic world he's made. this book has the main character wandering around and quite distracted from the main purpose of cultivating, but it's all just so entertaining to see what madness he will do next.

It keeps getting better

8 books deep and Vanderkerken continues to bring more and more life to the Divine Dungeon world. Always sorry when we come to the end of an Artorian tale and this one didn't disappoint

love the story I really do but how is someone who represents love not get more love between him and Dawn!

The story of our favorite art historian keeps on evolving. That Artorian is a little cracked in the head, but he sure keeps us entertained.