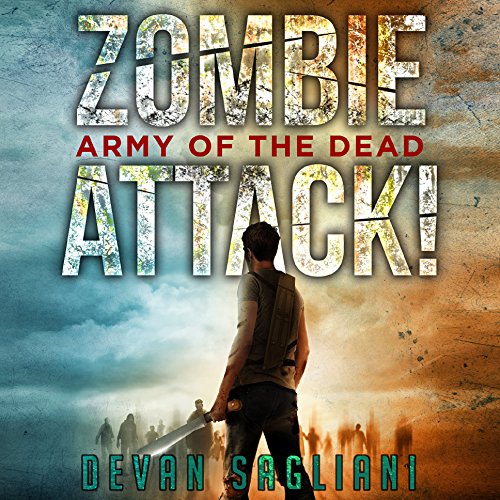 Army of the Dead

Army of the Dead

Xander MacNamara’s adventure continues when he is placed in charge of a civilian colony outside Barstow. He and his young wife, Felicity Jane, are forced to deal with the daily grind of reconstruction, the constant menace of zombies, and an equally hungry cannibal tribe known as the Alphas. Things heat up fast when Sonya, a mysterious stranger sent by a secretive benefactor, frees him from enemy captors. Once again, Xander and Felicity find themselves fleeing for their lives from a never-ending series of new threats as well as old ones. A hidden enemy within the military is hell-bent on creating a secret weapon: genetically engineered super zombies! Friends and soldiers are pitted against each other, as one side races to spread the cure while the other battles to gain ultimate control over the fate of mankind. Zombie Attack! Army of the Dead is filled with pulse-pounding undead action from the very first chapter until the bittersweet end. Child celebrities, reality-television stars, nightmarish zombie clowns, bikers, ninjas, warlords, and more - this book has it all! The story takes off like a bullet and doesn't slow down until the last sentence. You won't be able to put it down!

I had to start rolling my eyes again as Xander was acting all childish like in the last book, but he actually goes through character development and starts maturing. Much of this book has a teen tint over it, you have to put it in the perspective of younger readers to accept many of the pretenses it has. I mean, Xander is the military commander of a base? What is he, 16 or something? Yeah, you have to swallow some unrealistic scenarios.

So yeah, good book once you realize the target audience of the story.

I loved the story line in both books one and two. Narrator was awesome. I have one complaint.....this guy is LONG WINDED!!!! Damn. So many times right when you get to the climax of the story this guy goes off on some stupid rant about something unrelated to what's going on in the book. SEMI SPOILER COMMING UP.... For example....The story is cooking along at a pretty good pace. Xander and Moto are about to be hung for treason and the author stops the story and starts talking about childhood memories. I actually fast forwarded through several places just to get back to the storyline.

I am now sold on this series

After listening to the first book in this series, I found it to be a no brainer to listed to this book 2 in the Zombie Attack! series. While book 1 was pretty good, I am really hoping that Sagliani can grow his story telling from pre-pubescent to at least mid-adolescent.

Don’t get me wrong, I thoroughly enjoyed Rise of the Horde. But from there, there is so much room for growth.

My hat is off to Devan Sagliani for doing exactly what I wanted him to with this story. I wanted growth and I got it. He was able to create dimension and depth within his previously shallow characters.

A couple of things really surprised me here. First that somehow Sagliani was able to create a squeal that is closer to double the length of the first book than it was to the same length. More often than not I find that the second book to a series becomes shorter than the first.

Secondly, how the powers that be could have totally managed to split this into two separate stories. As I mentioned it was well long enough to do so. But also the sheer content and volume of the adventure had many suitable stopping points. Kudos for not doing this!

Thirdly, Army of the Dead didn’t suffer from what I like to call “Book 2 syndrome”. This is were the story slows down to a crawl. Only serving to give more back-story to the characters and to setup the awesome book 3 plot lines and villains.

Fourthly, this could have been a standalone story very easily. No real need to read or listen to the first book to fully enjoy what is going on. As everything we need to know is explained to us quite nicely.

Full of huge action scenes. All of the blood and guts and zombie ambushes one would expect. Characters that are more believable than not. That will take you through most of your emotions via zombie filled roller coaster. Plot twists and turns, while no all that surprising, all over. Pure zombie entertainment.

I am now sold on the series and will be looking forward to the next installment.