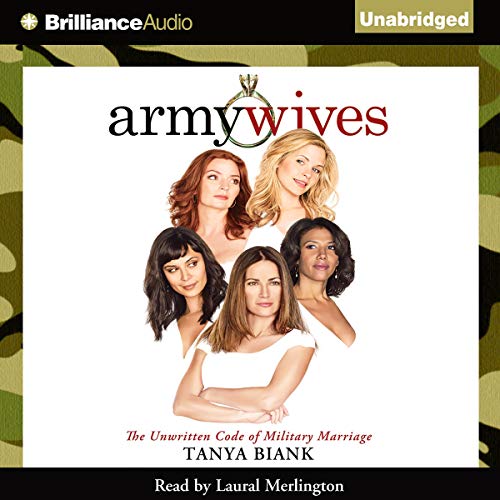 Army Wives goes beyond the sound bites and photo ops of military life to bring listeners into the hearts and homes of today's military wives.

Biank tells the story of four typical Army wives who, in a flash, find themselves in extraordinary circumstances that ultimately force them to redefine who they are as women and wives. This is a true story about what happens when real life collides with Army convention.

Army Wives is a groundbreaking narrative that takes the listener beyond the Army's gates, taking a close look at the other woman - the Army itself - and how its traditions, rules, and wartime realities deeply impact marriage and home life.

"Army Wives captivates readers with an up-close and personal look into the â¿¿real' everyday lives and challenges of Army spouses." (Victoria M. Parham, host of Military Spouse Talk Radio)
"Tanya Biank's experience as a reporter has produced a candid and detailed study of her subjects and a riveting story, certain to engage Army wives of all generations." (Joanne Patton, wife of Major General George S. Patton and daughter-in-law of General George S. Patton, Jr.)

True life, not the TV Show

Don't expect it to be like the TV show. Though I love the show and the characters are loosely based on the book, they are very different. It is the real life story of 4 wives and their families. It is sad, sweet, funny and real. It gives people an insight into our world, the world of military families.

After loving the show, I thought I'd love this. The reader had an old voice and didn't fit the part at all. I stayed confused how she jumped from character to character. I didn't care for this.
I am a huge military supporter but this just didn't do it for me at all.

I liked the look into military lives and the way it touches military families at home. I am a navy wife myself and found myself nodding and smiling while relating to some of the stories. I felt like the author did a decent job of capturing this but sometimes was annoyed how she kept referring to her connections instead of focusing on the families.

I think that more information on the realities of military life could have been explored but I understand that wasn't the full focus of this book. The way the at home wife is left to make hard choices and then defend them and how being left out of these decisions can make the service member feel is important. More education should be done on emotional health of the spouses and their families but this book is an important one for every one to read or listen to.

I'm a woman and a 21-year Army veteran. This book was especially interesting to me because of my years serving the US. When I saw this book, and after having seen the TV show, I really wanted to read the TRUE story of the women the show was based on. What I liked the best was that I recognized these women, not because I knew them personally, but because I had served with women like them and had met many Army wives they represented. The representations, as written, were accurate.

What I like the least was Laural Merlington's portrayal of the narrator. She failed to give her a true personality or point of view and her delivery was wooden. It was clear to me that she knew nothing about the Army. In fact, she was annoying. It's a good thing I had a compelling desire to hear the actual story or I would have given up after the introduction.

The performance could have been better if the narrator had even the slightest inkling of personality. The author was a journalist. The narrator did nothing to make the journalist's voice interesting or expressive. For the most part, she sounded wooden. Her phrasing was indicative of a computer-generated voice with little or no knowledge of the military. For example, she used the phrase "Brigade Command" "Sergeant Major." The phrase SHOULD have been "Brigade" "Command Sergeant Major." This is just one example. Her delivery was flat and uninspired, almost overarticulated.

Would you try another book from Tanya Biank and/or Laural Merlington?

It was alright, I wouldn't return it but I wouldn't give it a second listen either. I mostly likely would get another book from the author or the reader.

What was most disappointing about Tanya Biank’s story?

The story jumped around and didn't really have a good flow to it.

Just not my cup of tea.