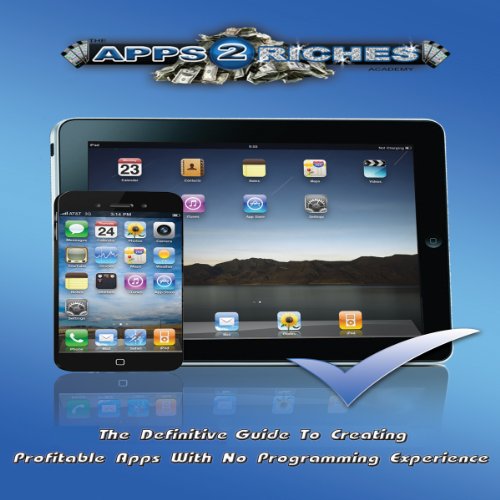 By: Mark Quinn,Rohan Patel
Narrated by: John Davenport
Try for £0.00

The App Store gold rush has proven to be one of the hottest money makers in recent history, where millionaires are created overnight. This has led many beginners to try and enter this business. However most don t know where to begin. While books may be great for certain subjects, app development is not one of them.

The Apps 2 Riches course is presented entirely in audio so you can easily absorb the information on the go. This leads to better retention of the material as opposed to reading a book.

Regardless of your technical background, the Apps 2 Riches four-week multimedia crash course is designed to help you create your own app or game that is guaranteed to succeed on the App Store.

A common beginner's mistake is focusing entirely on development process and then watching the app fail miserably on the App Store.

Proper app marketing is one of the most important factors neglected by first time app developers and a subject rarely covered by many books in this genre. Apps 2 Riches devotes an entire week to successful marketing on the app store using proven tactics and strategies.

Apps 2 Riches is the most complete resource for anyone serious about making money on the App Store.

If you ve been thinking about getting your feet wet with apps, this is the most complete package to help you get started.

What listeners say about Apps 2 Riches

Apps2Riches - Audio - where is the material

I started listening and thought this is a very good course and the audio is good...

however I soon realised that there was something missing....

On the download version there was no reference materials or details of how to get at the material needed to follow the course (I also believe that you really need the visuals to make full use of this audio version of what must be a video course).

It has made me want to follow the course but suspect I have to become a member of the web site to do so...

or buy the DVD version of the course.

I am unfortunately going to have to contact audible to request that I return this - its good but no use without the Apps2Riches materials.

What disappointed you about Apps 2 Riches?

This book sounds like it was an incomplete draft copy, produced by amateurs. There are multiple volume changes, microphone changes, missing information, retakes, even chapters that sound like they were recorded on a cell phone in the front seat of a car. I wouldn't be so critical, but this book even has a section where the narrator paused, and then said "...........it's that easy" but never gave the information for the example! There is a silent part about an hour in where it looks like the author had intended to fill in the specifics later, and completely forgot! The app-specific info is far too complicated for an audiobook, ie... "goto file, the click the....". Great for a workbook, not an audio book. There was some info that may be useful to anyone building an iPhone game, but the best information I got from this book about building my app was a list of contract app builders!!! OVERALL, 3 / 10

What was most disappointing about Mark Quinn and Rohan Patel ’s story?

This was too specific for an audio book. Impossible to follow.

Who would you have cast as narrator instead of John Davenport?

The sections that were professionally narrated were well done, but there were Many sections of this program that seemed to be haphazardly added after the professional recording was completed. They were a different voice and the recording quality was a drastically lesser quality.

If you could play editor, what scene or scenes would you have cut from Apps 2 Riches?

There was far too much software-specific information to follow along in as audiobook without that piece of software open in front of the listener.

As someone who is excited about designing, building, marketing, and distributing a new app, this recording left me very disappointed.

no one! anyone that wants to learn about apps go else where

What could Mark Quinn and Rohan Patel have done to make this a more enjoyable book for you?

deliver on the title or just provide useful info about apps

Would you be willing to try another one of John Davenport’s performances?

no fool me once