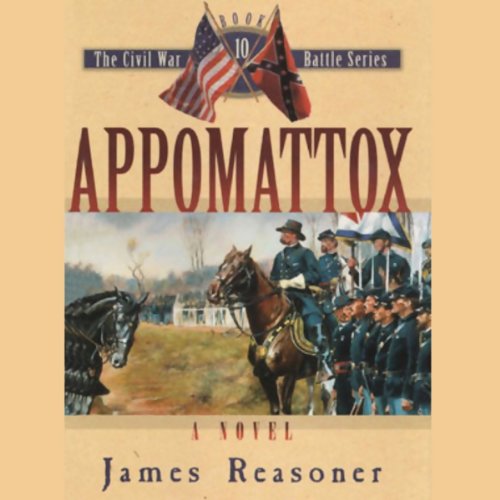 By: James Reasoner
Narrated by: Lloyd James
Try for £0.00

With the conclusion of the 10-volume Civil War Battle Series, the multiple strands of the story are woven toward their resolution. Members of the Brannon family are involved in battles spread across the country. In the Shenandoah Valley, Mac and Titus fight alongside Fitzhugh Lee. Nathan Hatcher wears the Union blue in the Dakota Territory, while in the Deep South, Cory fights against William T. Sherman and Henry rides with Nathan Bedford Forrest in Alabama.

In the spring of 1865 the war reaches its climax at a crossroads in Virginia known as Appomattox. Soon after, the war is brought home to the Brannon farm when carpetbaggers move into the South and the family must decide whether to fight or flee.

What listeners say about Appomattox

Loved the whole series. The Brannan will live with me for a long time.

Not a Disney ending

For over 100 hrs I have listened to the story of the Brannon family living and fighting through the Civil War. At times its been a bit cheesy but over all it has been a cracking good read (or rather listen!).

For me the highlights have been Lloyd James' narration, James Reasoner's battle descriptions, the characterisation of the Brannon boys, the explanation of the historical context and the effect of the Civil War on the ordinary civilians.

Lloyd James has been a joy to listen to. He has a lovely tone to his voice that you can listen to for ages but his real ability is to give a character an accent and use it only for that character and come back to the very same accent maybe books later and sound just right. That is a true skill. I hope that Lloyd's skill has been recognised and that he does considerably more narrating in the future.

James Reasoner has the ability to paint a picture with just words and in particular has the ability to describe a battle or even a fist fight so well that you can see it in your minds eye. There are times when is normal storytelling is a little flat and his female characters are somewhat two dimensional but give him a battle scene and you see it in full cinemascope in your mind.

I am going to miss listening to Lloyd telling us about the Brannons and I was right there is a hole in my life that I haven't found a way of filling as yet. But I know I will but I shall look back at this saga with pleasure.

The series is one I would recommend but only if you mean to see it through to the end and in quick succession. Its true that the pace does slacken off but so did the events in the Civil War and its here that the Brannon family history moves up a notch. I've thoroughly enjoyed it and I hope that you do too.

I listen to all 9 books to bad it came to an end I wish it would continue. The voices Clint,Elvis and a couple other were neat.

Story leaves off before the ending, doesn't finish the story of the Branons!! more needed

I love this whole series.in my opinion these are the best books of all time.

This "last" story does a very nice job of bringing family members thru the war - but as another reviewer points out - things are by no means resolved at the end of the book. I very much hope that the author writes some additional books on reconstruction because I will certainly buy them.
Very interesting how specific Brannons are placed in position to witness Lee's meeting with Grant and the John Wilkes Booth saga. And a touching and appropriate ending
I think it was nice that the author dedicates the book to those who read all 10 - now go write some more!!!!!!

What a terrific wrap up on a terrific series. I had not realize how long hostilities continued after Lee's surrender to Grant in the war of Northern Aggression. Getting all the family back together in a clean manner, then having them lose the farm to carpetbaggers and move to Texas was unexpected---and well done. Now he can write more about the Brannon's and their adventures!!! Read them all 10 novels!