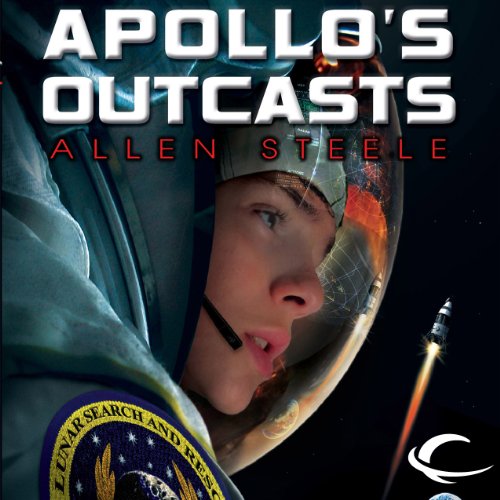 Jamey Barlowe has been crippled since childhood, the result of being born on the Moon. He lives his life in a wheelchair, only truly free when he is in the water. But then Jamey’s father sends him, along with five other kids, back to the Moon to escape a political coup d’etat that has occurred overnight in the United States. Moreover, one of the other five refugees is more than she appears. Their destination is the mining colony, Apollo. Jamey will have to learn a whole new way to live, one that entails walking for the first time in his life.

It won’t be easy and it won’t be safe. But Jamey is determined to make it as a member of Lunar Search and Rescue, also known as the Rangers. This job is always risky but could be even more dangerous if the new US president makes good on her threat to launch a military invasion. Soon Jamey is front and center in a political and military struggle stretching from the Earth to the Moon.

Allen Steele was a journalist before turning to his first love, science fiction. Since then he has published 17 previous novels and nearly 100 short stories. His work has received numerous awards, including three Hugos, and has been translated worldwide. A lifelong space enthusiast, he has testified before Congress in hearings regarding space exploration, has flown the NASA space shuttle simulator, and serves as an advisor for the Space Frontier Foundation. Steele lives in Massachusetts with his wife and dogs. Visit him online at www.allensteele.com and at www.facebook.com/Allensteelesfwriter.

A different story line from Mr Steele. Not a hard science fiction story, more of a space opera. But a good story for all that.

Would you listen to Apollo's Outcasts again? Why?

This book was a very enjoyable classic sci-fi tale. It very much reminded me of the best of the Heinlein juvenile. Allen Steele is one of the finest artists in the genre and this book showed an entirely new dimension to his work. If you like classic sci-fi, kids growing up in space, good guy - bad guy throw downs, you will not regret listening to this tale.

Also, the narrator does a fine job.

Great story from the author

Add to your collection . Very similar to Ben Bova story of the moon colony .

I love 'hard' science fiction and this is a marvelous example of that genre. A young man who was born on the moon is a cripple on Earth, but must go back to the moon when US politics goes seriously wrong.

Jamie is just fine on the moon and is ultimately instrumental in setting things right in the colony. The science is 'spot-on'. Don't miss this book!

I enjoyed it so much that I listened to it again 2 days later.
I would recommend it for teens (and adults), but probably not for tweens or younger. There's a lot of people saying "oh my G--!" and there is one make out scene that is getting out of hand (spoiler- it's interrupted before I would have had to dock this a star for adult material in a YA book).
There are also some grown up concepts (war, death, sacrifice) that makes me say not for tweens. A great book! I laughed, cried, and totally related to the teenage anxiety.
The universe was believable and well explained, without getting bogged down in science/tech.
I will probably look into more by this author.
I enjoyed the narration. The voices were consistent, the rhythm/pace was spot on, and I'd listen to him again.