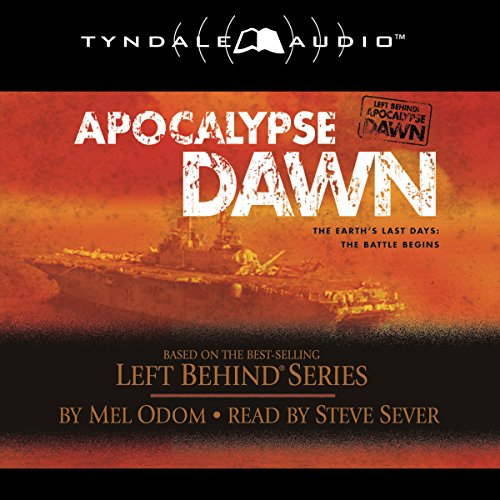 From the decks of U.S. Navy carriers patrolling the Mediterranean to Fort Benning, Georgia, and the dusty sands of the Turkish-Syrian border, this new suspense thriller runs side by side with the phenomenal Left Behind series that has sold more than 50 million copies.

In a single cataclysmic moment, First Sergeant Samuel Adams "Goose" Gander finds himself center stage in the opening act of the Apocalypse. Goose and the men of the 75th Army Rangers fight to survive a massive attack on the Turkish-Syrian border. Battling his own failing faith, Goose prays for the lives of his men and the innocents who are caught in the rain of bullets and missiles.

Back home, Goose's wife, Megan, fears for her husband and rebellious son while she struggles to save another family. But her life is upended by an incredible, confusing, remarkable occurrence. She is not alone.

What listeners say about Apocalypse Dawn

There was a lot to live up to, coming from the Left Behind stable as it were, but once again the story draws you in with characters that are realistic. Have read three books in the apocolypse series now and each one has been a joy to read. Enjoy

Adding Guts to the Glory

While the original Left Behind series crossed over the lines of the Christian marketplace and into the New York Times bestseller list, it always had the feel of a 'traditional' Christian novel. Apocalypse Dawn has all of the faith of the original, but with a Tom Clancy style that hooks you from the first moment and never lets go. More gritty and with more shades of grey than the first series, those who love the best of military and techno fiction will not be dissappointed, while those who seek the message that propelled the orginal will be satisfied.

Well narrated and well produced, this is a must for all fans of Left Behind and a great introduction for those who haven't yet taken the plunge. Hooorah!

Tom Clancy with a bible

From the openning scean to the final words this book is like reading a Tom Clancy book with bible prophacy tossed in.

If you're like me when listening to this book you better set aside a huge block of time because you wont be able to turn it off...and chances are you'll find yourself praying for the characters...it's that real.

This narator is probably the best I've heard in a long time...that's why it feels so real.

You'll be able to almost feel the grit on the faces of the Army Rangers in the Middle East, and at times you'll find yourself giving orders as if you were right there.

Lastly, if you have not read the original Left Behind books I strongly encourage that as you will not understand the uses of some of the terms or characters.

It will make you cry and be afraid

I have read several other reviews and completely agree with the 5 star people. I wasn't paying too much attention to where the story was going when I first started reading it with my ears. It certainly grabs you and won't let go until the end and then you have to pry each finger away, one at a time, with difficulty. I never cry when I read, but I did. What is there to fear in a book? Nothing except I ask myself when will it by my turn? It is captivating, riveting, biblical, and almost real.

Left Behind from a different viewing angle

I enjoyed the original Left Behind series and feel the same about this series so far.

If you bother to read the description, it clearly says it is aligned with the Left Behind series. As an avid fan of that series, I thought I would give this a try. What a great story! It is so fast-paced and engaging. I jumped right into the second book Apocalypse Crucible. Both were fantastic. I am going to have to buy the books for the the next two because they are not out in audio yet. Great story telling!

I have listened to many audiobooks and been dissappointed. However this one was different. It held me from the start. I have heard all the left behind series, and this one was better than any of the others. LeHaye and Jenkins have nothing on Odom. I only wish the author wasnt constrained to follow the storyline in the original "civilian" series.

Talk about the Tide of Battle taking a bad turn.

Imagine the rapture taking place in the middle of a hard fought battle while you were fighting a non believing enemy. Consider the impact on the soldiers who are "Left Behind". Better yet, listen to this book, you won't be sorry.

I found it to be a slow, and sermonizing start. Once it got started it was very entertaining. Not quite Tom Clancy, but good on it's own. If I had to relate to other authors I would cross Clancy with a Stephen King flair for the supernatural aspect of the story.I am waiting for the next installment.

Are there really people giving this book about the Christian Tribulation low scores because it has too much Christianity in it? hahah! I'm a disabled war vet and I listen to a lot of ebooks. Military Fiction/MilSciFi and Military zombie/apocalypse are my favorite genres. This series by Mel Odom is easily in my top 10. HOWEVER, if you hold disdain for Christianity, this series is not for you, it will just make you unexplainably angry. If you're an open minded non-Christian, I you'll probably still love this book. As a veteran and a self professed Paladin for God, I can tell you that war/tech details and dynamics concerning faith/lackthereof are very accurate. The characters are engaging and the story line moves very smoothly. This writer, this book, and this narrator are truly outstanding. Highly recommended.

i believe it be like that! in some ways from a soldier and a wife of a soldiers. it is very intense book from a military few point and being a strong born again believer. God is good and God will do what every He can for the souls of this earth open there eyes. and come be with Him in Jesus name. Thank you Lord for your love and Grace. in Jesus name.