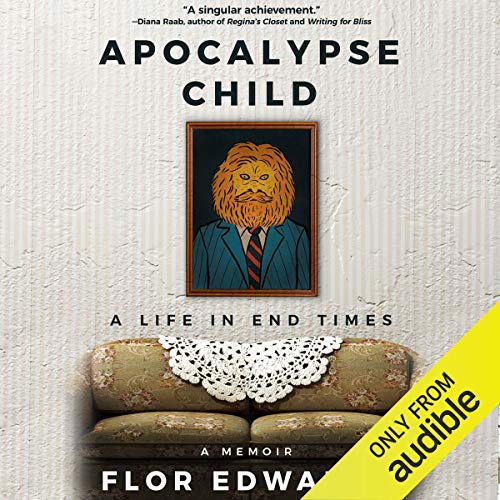 For the first 13 years of her life, Flor Edwards grew up in the Children of God. The group's nomadic existence was based on the belief that, as God's chosen people, they would be saved in the impending apocalypse that would envelop the rest of the world in 1993. Flor would be 13 years old. The group's charismatic leader, Father David, kept the family on the move, from Los Angeles to Bangkok to Chicago, where they would eventually disband, leaving Flor to make sense of the foreign world of mainstream society around her.

Apocalypse Child is a cathartic journey through Flor's memories of growing up within a group with unconventional views on education, religion, and sex. Whimsically referring to herself as a real-life Kimmy Schmidt, Edwards's clear-eyed memoir is a story of survival in a childhood lived on the fringes.

What listeners say about Apocalypse Child

Thank you Flor for writing this story, our story. A story so hard to explain to the outside unless you've been there as well.

A truly unique background and story

I've read more than a hundred memoirs/ biographies and there are precious few written by cult survivors. This book is a cathartic look by the author at her background and upbringing and offers insight into a very dimly understood part of our society, that of an entire childhood lived within a bubble completely isolated from the societal structure that most of us completely take for granted. It can be extremely difficult to integrate into a society which is foreign to a cult survivor or even victims of abuse or other trauma. This is an inspirational reminder that it is possible.

Found this title through Narratively. Read the author's two articles and really got pulled into her world. Her reading of this story on the other hand feels a bit too forced. Still listening though.

Edit: Just realized it has to do with the emphasis placed on each word when read. But the reading improves in Chapter 2, so just stick with it!

I’m sure that growing up in a cult was difficult for these kids but mostly in the afterwards. I mean that they were not tortured or abused and they had a loving family. Their upbringing was unconventional but it was the adaption to the world outside of the cult that was a big deal for them and others who left the Children of God group. Others have more lurid tales of this group but this author was one of 12 children raised under one roof with her parents and other group members. They moved a lot but had good world experiences while also being indoctrinated with a religious fervor. She sounds like she and her siblings did the necessary work to get past the strange circumstances they were raised under. Fascinating story.

Flor Edwards tells the story of the Children of God from the point of view of a child living inside the cult. She's not only the person to tell the story but also the best narrator for it. Readers of a certain age will remember the headlines, and yet the story is told timelessly, with great insight and clarity.