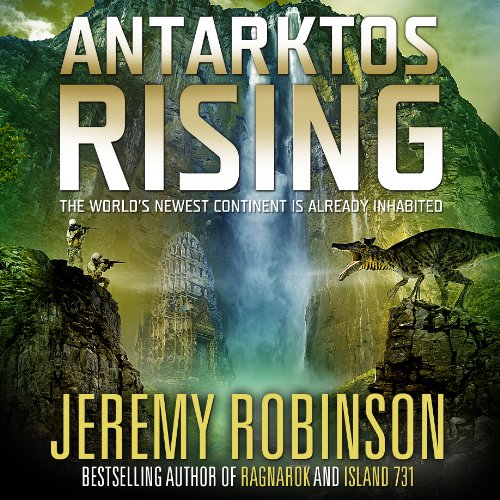 THE WORLD RACES TO CLAIM A NEW CONTINENT...

A phenomenon known as crustal displacement shifts the Earth's crust, repositioning continents and causing countless deaths. In the wake of the global catastrophe, the world struggles to take care of its displaced billions. But Antarctica, freshly thawed and blooming, has emerged as a new hope. Rather than wage a world war no nation can endure, the leading nations devise a competition, a race to the center of Antarctica, with the three victors dividing the continent.

It is within this race that Mirabelle Whitney, one of the few surviving experts on the continent, grouped with an American special forces unit, finds herself. But the dangers awaiting the team are far worse than feared; beyond the sour history of a torn family, beyond the nefarious intentions of their human enemies, beyond the ancient creatures reborn through anhydrobiosis--there are the Nephilim.

...ONLY TO FIND IT ALREADY TAKEN.

If you enjoy Antarktos Rising, be sure to check out The Antarktos Saga, also by Jeremy Robinson. The first two books in this brand new series are prequels to AR. The third book parallels AR. And the last two books finish both story lines as the merge.

The Antarktos Saga, in order:

"Jeremy Robinson is an original and exciting voice. Antarktos Rising has just the right blend of menace and normality---a tale full of intrigue, treachery, and a wealth of secrets. A good old-fashioned suspense story set in one of the most desolate places of earth. It fires on all cylinders in a smart, taut thrill." (Steve Berry, New York Times bestselling author of The Venetian Betrayal and The Charlemagne Pursuit)

"Apocalypse comes to Antarctica. Jeremy Robinson balances Biblical speculation upon a dagger-edge of suspense and adventure. With Antarktos Rising, Robinson opens a new dark continent of terror. Trespass at your own risk." (James Rollins, New York Times bestselling author of Black Order and The Judas Strain)

"An awesome journey into the beating heart of a legend. Jules Verne would be proud." (Stel Pavlou, bestselling author of Decipher and Gene)

"A fast-paced chiller that delves into new possibilities about our future...and past." (Steve Alten, best-selling author of Meg and The Shell Game)

"How do you find an original story idea in the crowded action-thriller genre? Two words: Jeremy Robinson. Antarktos Rising combines history, science and myth about Antarctica to create a jaw-dropping concept so real it will have you Googling like mad to learn more after the story is finished." (Scott Sigler, bestselling author of Ancestor and Earthcore)

What listeners say about Antarktos Rising

Couldn't finish it. I'm quite prepared to willingly suspend disbelief, but some stories are just too silly to go along with.

The build up was well timed along with the realisation of what had happened. Then the journey. I don't want to add to much so as not to ruin it for others.

The book has multiple characters all with there own strong personalities, it is hard to choose one when 6 stand out.

Just the enjoyment of the story

Either read it or listen to it, it is a great book.

Totally. This book was a very enjoyable listen. It contained a lot of suspense and action and most of all an interesting story. The story interwove, Biblical myths, horror, adventuring and survival.

The story continued to grow. It didn't just go down one direction i.e. apocalyptic disaster; it went from there onto the next twist and then onto the next. It kept the story interesting and fresh rght to the end.

Have you listened to any of R.C. Bray’s other performances before? How does this one compare?

R.C. Bray. Is a MASTER narrator. In my opinion he is in the top 5 narrators I have ever listened to. He is the first narrator where I searched to buy a book on Audible by narrator rather than author. He is that good.

Could you see Antarktos Rising being made into a movie or a TV series? Who should the stars be?

I could definitely see this book being made into a movie. It has all the elements necessary, in addition it isn't too long, so it wouldn't be totally butchered on the silver screen.

This book was a good listen, listened to it in one sitting (day) over the weekend. There are several other books in this series apparently and I am excited to see if they continue the interesting story.

*This audiobook was provided by the author, narrator, or publisher at no cost in exchange for an unbiased review.

Cheesy and cliche writing leading to an adventure that calls to mind the 1930's and 40's pulp fiction writing. Only the cheaper kind.

Dinosaurs and communists, terrorists and demons, all with a ever increasingly shoehorned Christian backdrop. It left me remembering the left behind series fondly.

The author goes out of his way to make characters racist caricatures. The only Arabs, terrorists, the Hispanic marine always has to be relatively uncultured, cocky, and insensitive. The African American always has to be sage yet sassy.

I will admit I did have fun listening to this, it had some good mindless adventure in places. Although I was waiting for him to slip a nazi in for good measure to give it that

The performance was a little better than the writing but not by much, what with the inability to pronounce the names of well known ancient gods, the names of common supernatural creatures( in literature that is) and various other things took away from the performance and left me gritting my teeth whenever I heard them.

Worth the 4.99 blue moon special, but only if your not paying close attention.. Not worth the full price.

There is so much going on in this book

There is so much going on in this book it can get a bit overwhelming.Professor Merel Clark believes he is right about the Antarctica ice covering ancient fossils. It is a fact that Antarctica is a continent, unlike the North Polar region which is all ice. He sets up camp in a valley and searches for signs he is right. Merel is also a devout christian. Prayer is part of his evening ritual. He never goes to sleep without praying to God.

Mira Whitney is a wild life photographer. She has traveled all over the world for her pictures and is well known and respected in her field. Mira has been on several excursions with Pro. Clark in Antarctica. After the apocalyptic crust shift the earth is devastated by tidal waves, volcanoes, searing heat waves and deadly cold. Billions of people have died. One continent however has changed. The frozen Antarctica has become a lush jungle teaming with unknown flora and fauna.

This is one of the best end-of-the-world-as-we-know-it thrillers I have ever read. It has everything, devastation, treachery, lost love, found love, horror, monsters and even daemons. All this and it is totally believable when blended with science facts. I liked the anhydrous idea. I’ve seen nature shows that document desert bloom and Africa, when the rains start, frogs and other life re-hydrate.

The characters in this epic work of “fiction” are very well developed. You want them to succeed and feel the loss when one of them dies. You even feel sorry for some of the bad guys. The dialogue is not overly technical, easy to follow and carries the story with ease.

If you like Cussler, Rollins, Ludlum and others like them you will LOVE Jeremy Robinson. A must read hardcover or audio book for all thriller/apocalyptic/adventure fans.

I was enthralled with the narration. I listened almost straight through. R. C. Bray really got into the story. Brought it to life. No problem with the production either. Every word was clear and precise. No static or jumps. Very smooth.

I having been listening to his Last Hunter series and this fits in nicely after the second one.

Kudos to Jeremy Robinson, this is an excellent story, Keeps you on the edge of your seat, its ability to mix science fiction, science facts, and theology all in one amazing gut renching story prevents you from putting it down. R. C. Bray does a marvelous job narrating. Well worth it!!

What disappointed you about Antarktos Rising?

I found the story contrived especially when dealing with relationships. The plot seemed promising but never kept my interest for long. Finished with relief.

This book was offered in the surprise $4.95 sales and had a limited description. I know it was only $4.95, but if I had known it was going to be a Christian science fiction based on preposterous pseudoscience made to fit with bible stories I wouldn't have wasted a penny. I like my SCIENCE fiction to have at least a plausible amount of actual SCIENCE in it, not all complete fairy tale with preaching!! Couldn't even finish it.

This is where it started.

I read the Last Hunter series and it was good. I missed this book and realize this is where the story started and how brilliant changes to the Last Hunter books to accommodate this beginning story. I reccomend reading them in order if you can. If not like me, it's still a great story and you can follow how things were morphed into the Last Hunter books. Really good and Mr Bray was excellent as always.

I usually enjoy RC Bray’s narration of most books. But the start of this one, naming of locations in New Hampshire/Maine, was painful to listen to. Having grown up there, hearing Kittery Maine pronounced as Kit-tree is annoying. When narrating, especially if a character is supposed to be from a certain area, the narrator really should learn how to properly pronounce the names of towns or locations. I know it’s pretty minor but it can make a book hard to listen to if mispronounced words are constantly being read.

This has been an absolutely incredible side story to "the last hunter". I can't wait to find out what happens next.