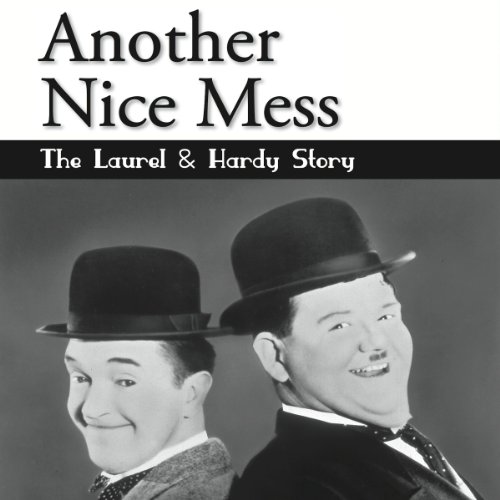 By: Raymond Valinoti
Narrated by: Jack de Golia
Try for £0.00

Arguably the greatest comedy duo in show business history, Stan Laurel and Oliver Hardy delighted filmgoers and theatregoers for over 30 years. The public not only found Laurel's serene simpleton and Hardy's pompous buffoon hilarious, but they also thought of them as friends. Laurel and Hardy may have been nitwits, but they were loveable nitwits.

Another Nice Mess: The Laurel and Hardy Story explores the lives and careers of Laurel and Hardy. The book examines how the comedians teamed up and it explains why, nearly half a century after their deaths, their films continue to enchant people all over the world.

What listeners say about Another Nice Mess

Lives up to its Title

I approached this book with some degree of anticipation, not only because I have been a fan of Stan & Ollie since childhood, but also because there are very few books (and even fewer audiobooks) about their lives and work. But from the very outset it was clear that this book is aimed purely at those who have little or no idea who Stan & Ollie were, and the Narrators monotonous drone only heightened the feeling that the listener is being addressed as if he/she were a 7 year old. The author has done little more than compile a bunch of dates and events, padding them thinly with unsubstantiated opinion and rhetoric.

As an example the author tells the tale of the young Stan, penniless after a failed theatre tour, arriving back in London and ‘Having to walk all the way from Waterloo Station to his brother’s house in High Holborn’. As a Londoner I can tell you this is no more than a mile at most, and all of it flat. It couldn’t have taken the young Stan more than 20 mins, but the tone of the narrator is so dour that the listener could be forgiven for thinking Stan had a long and arduous journey ahead of him.

This Narrator’s condescending style (in fairness hardly the authors fault) is then worsened by his tendency to explain every minor reference as if he were taking to a classroom full of kids. Example; the text mentions that Ollie liked to paint “but knew he was no Picasso.” The Narrator then adds, “Pablo Picasso was a famous painter of the time”. Now I’m not saying that most people would be able to name any of Picasso’s works but I’m confident that there can’t be many people in the western world who don’t know that Picasso was a painter. Similarly when the story mentions the Prohibition Era, they then add solemnly that this was “when alcohol was illegal in the United States”.

I don’t know how old this production is but it is also the first in a while where I’ve heard the old-style use of ‘Dateline Addresses’ as in “Paris, France” instead of just ‘Paris’, “New York, New York” instead of just “New York”. I do appreciate that some cities share names but I think in this day and age when you talk about London people will know you mean the one in England (which the Narrator also reminds us is in the UK which I found very helpful), and that Paris is the capital of France and has a very famous tower at its’ centre. (Admit it, if it hadn’t been for the eponymous film you’d never had heard of Paris, Texas). And there really is, and only ever will be, one New York.

For me (and I’m no Laurel & Hardy expert, I’m just a fan) the lack of decent research is particularly disappointing. At one point they talk about Stan’s famous crying routine, saying how he “wrought laughter from tears” (No really, they actually say that). Anyone who knows any history of the boys would tell you that Stan hated doing the crying, he did it once in an early film and it became so popular that he was saddled with it for the rest of his career. He was often quoted as saying that he felt crying made his character look weak and pathetic, whereas the whole premise of the characters was the way they would cling to their dignity no matter what life threw at them. That’s why audiences loved them.

This book would be fine for any young people who either had never heard of Laurel & Hardy or who have recently discovered the boys and want an overview of their backgrounds. For anyone over 25, I’d pass. The search for a decent L&H Biography goes on...

This is a thoroughly enjoyable book—a quick read about L&H that is far more than an outline yet not a mainline book. There are a lot of direct quotes, details of their youth, progression of contractual ins-and-outs through the years, major characters in the boys' lives, the whys and wherefores of their best and worst films, and notation of their number of marriages. There isn't much deep psychological insight but it's not that sort of book. Another Nice Mess is a good deal for the dough.

This was a very good book! I enjoyed the facts and could picture all the movies in my headJack de Golla was a fantastic narrator.I was given this free review copy audiobook at my request and have voluntarily left this review.'

This book is better than I expected.

This book is better than I expected. It is only 3 hours but it is full of information. I waited a long time to read a book about Laurel and Hardy.

What did you love best about Another Nice Mess?

This is a wonderful overview of the careers of Laurel and Hardy.

The historical setting and details add to the enjoyment of the behind-the-scenes workings of Hollywood in the period.

What about Jack de Golia’s performance did you like?

What a wonderful voice Jack de Golia has! He would be perfect for a Ken Burns documentary made from this book. His easy delivery and resonant tone is delightful. I'll listen to anything read by him.

Anyone who knows Laurel and Hardy would think the title would serve: ANOTHER FINE MESS.