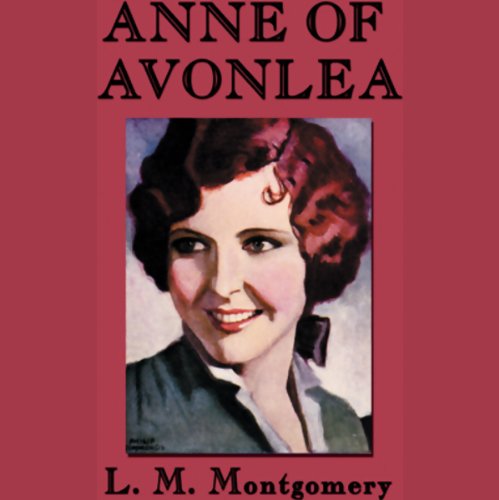 Five years have passed since the orphan girl Anne Shirley came to live in the childless home of Marilla and Matthew Cuthbert. She has returned to Avonlea to teach in the same village school where she herself was taught. Her earlier friends, Diana Barry, Jane Andrews, Priscilla Gray, and Gilbert Blyth, have also become teachers at neighboring village schools.

A mysterious new neighbor and his parrot named Ginger are now added to the original cast of characters. And there are the mischievious but darling Keith twins, Davy and Dora, whom Marilla has adopted.

"With a brisk pace and pleasant, natural style, O'Malley's voice makes a good match for Anne's sweet-natured temperament and higher energy....O'Malley gives the many narrative passages, and Anne's parts, a lively quality, while setting an overall tone of nostalgia to match the story." ( AudioFile)

What listeners say about Anne of Avonlea

I found the reading of this book very disappointing. The reader was curiously monotonous and sometimes mis-pronounced words or applied an inappropriate emphasis which seemed to indicate she wasn't thinking about what she was reading.

I felt that this was very poorly read; the children's voice's sounded very similar and lacked the joy of childhood naivity and discovery. I had listened to Anne of Green Gables read by another narrator - no contest.

Unfortunately the narrator spoiled this book for me. Monotonous, depressing and tiresome. Such a shame as I love the Anne books.

The narrator ruined it for me

I could only listen for the first 30 minutes, that's how bad the narrator was.

I loved reading Anne's books many, many years ago. Such a treat to find them on audio with a wonderful narrator. I've enjoyed several of Susan O'Malley's narrations and this was a joy to listen to. I've going to be listening to the rest of Anne's tales.

I chose this rating due to the long enjoyment I have had with this audible book. Susan O'Malley's performance is so magnificent that you forget only one person is narrating. She takes you right into each character. Maud Montgomery, as author, continues the growth of Anne in a superb fashion bringing her character up as well as her age

Loved this book for many years. This narration did not disappoint. I laughed, I cried! Love Anne!

5 stars for the warmth it brings to my heart and for the enjoyment of a simpler, more loving time.

I have listened to the 1st book in the series with great pleasure. It was charming and enchanting. However, as the heroine grows up, in this the 2nd part, the book loses a great portion of its magic. The first part has the power to captivate the hearts and imagination of children and adults alike. The sequel does not have the same universal appeal and belongs in the realm of teenage fiction, that some (including myself) may found predictable, boring, platitudinous. While I would enthusiastically recommend the first book to a reader of any age, I think only my 12-year-old niece might be interested in the second.

That said, it is still very good writing - sparkling style and precise language. The narrator is great.

Great Story, could be narrated better

I love all these stories, but this narrator isn't my favorite. Sounds a little mechanical.

The audio seemed to get louder at times which was odd.

But I love this story. I have read it so many times. Anne really is a kindred spirit.

Memorable but not necessarily for good reasons

I decided to revisit Anne and Avonlea after listening to the wonderful Rachel McAdams version of book 1. This one has some getting used to in terms of the stilted performance. Had this version not been “free” with my audible subscription I would have been a bit less forgiving.
The story is another thing altogether and while there are so many bright spots (from Davey’s mishaps with the lemon pies to the discovery of the stone house), I’m so reminded of how much work we have to do. There are so many things that are just unpalatable— from poor little Dora’s ‘monotony’ to Miss Lavender being ancient at 45. The misogyny is pervasive despite Montgomery writing a story for the‘progressive’ woman…progressive for the day… which was 1909.

The absolute, most HORRIBLE narration I have ever heard. It literally sounded mechanical. Like a robot was reading it. Stilted, zero emotion. My GPS in my car sounds more like a live person and has more emotion than the person who read this. Thank goodness it was free!