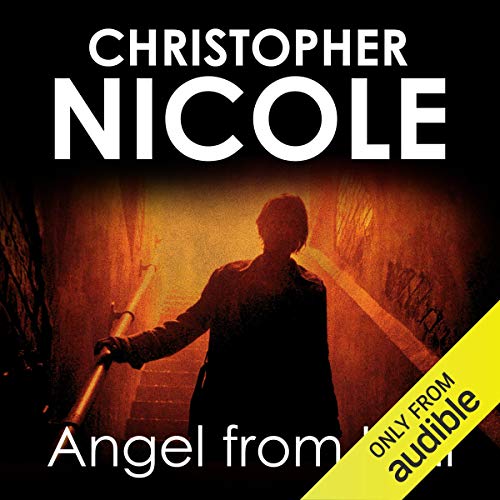 When in March 1938 Germany invades Austria, all anti-Nazis are immediately rounded up and imprisoned. Prominent amongst these is liberal editor Johann Fehrbach, his Anglo-Irish wife, and his two daughters. But the elder of the girls, 17-year-old Annaliese, is separated from her parents and taken into Gestapo custody.

The officer arresting her has immediately recognized that she is an exceptional personality: Extraordinarily good-looking, she has an IQ of 173, is a superb athlete, head girl of her convent, and, because of her mother, speaks English fluently. Annaliese is taken off to an SS training camp and after an exacting and often terrifying learning process, is inducted into the SD, the most secret of German secret services.

What listeners say about Angel from Hell

I'd recommend this book to anyone who likes a bit of a titilating read, lots of firm breast and sinewy thigh to keep the interest if that is how you like it. I love historical novels of many kinds, but this book, whilst set in one of the most interesting periods in history doesn't really offer any new insights into what life was like, unlike, for example, one of Philip Kerr's Bernie Gunther series, So if I thought my friend was into descriptions of torture in which the tortured women nevertheless reach orgasm due to the interesting arrangement of the crocodile clips in the erotic area, then obviously these novels would be first choice.

The most interesting aspect of the story is that you can listen to it at all. I didn't feel inclined to huffily ask for my money back or even to stop before the end. This is probably because just as the details get too obviously erotic the chapter ends and the next begins. The least interesting for me is manifestly the monotonous description of the heroine as a beautiful leggy blonde, over and over and over. The book is read by a very capable reader, but she cannot change the fact that everyone, male or female, Heydrich, Himmler, Stalin or female gulag guards and female Nazis are described as unable to stop themselves from (at the very least wanting to) jump on her.

Which character – as performed by Jilly Bond – was your favourite?

Jilly Bond does a great job, but the characters, largely Nazis and Stalinists, do not really become favourite in any way. When the book started I thought it was going to be chick lit meets Nazi brutality but the main character is far too calculating for the chick lit category and the Nazi brutality is mainly sexual. Her over the top characteristics do not melt the heart. The two nice men in the books are never more interesting than just that, quite nice.

Could you see Angel from Hell being made into a movie or a TV series? Who would the stars be?

Don't expect a historical spy thriller, then it probably isn't as bad as I'm making it sound.

If you could sum up Angel from Hell in three words, what would they be?

Which character – as performed by Jilly Bond – was your favourite?

Not my normal genre to read so I picked a book that I liked the title of and I was clearly being favoured by the reading gods! What a story! From the start you're pulled into the past and dragged from scene to scene in such a way that you are too entrenched to put the book down! I loved the narator, perfect voice for this book. Lovely twists and turns without being stupid and interesting detail, not too much to drown the picture your own mind makes, but just enough to poke your imagination into the right mode. thoroughly enjoyed this one and will be getting the rest of the series.

Would you listen to Angel from Hell again? Why?

Have you listened to any of Jilly Bond’s other performances before? How does this one compare?

No but perfect for this book and the 7 others

Please do all 8 books . Great in every way. Get theses books you won't be sorry..