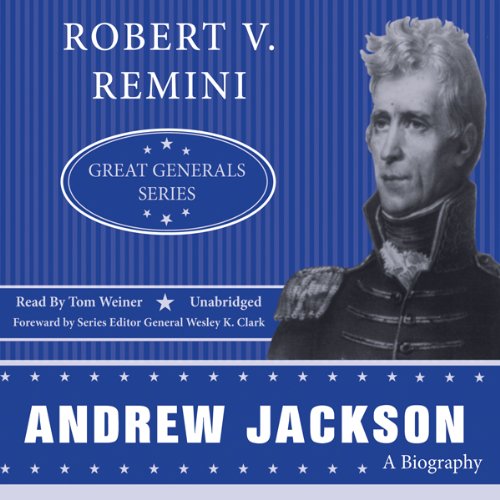 The newest addition to Palgrave's Great Generals series focuses on Andrew Jackson's career, including his time as a general in Tennessee and his rise up the Army ranks.

Jackson's effective use of spies in wartime and of martial law in peacetime sparked a debate about the curtailing of civil liberties in the name of national security that continues to this day. Most of all, Jackson was a great motivator who could, with a few carefully selected words and by his own brave example, turn around starved, deserting troops, convincing them to fight.

With dramatic scenes of fierce battles and victories, Remini reveals here why Jackson's bold leadership as a general led to his election as president of the United States in 1828.

"Robert Remini, the dean of historians of Andrew Jackson, has done it again. This is an essential book for anyone interested in one of the greatest and most controversial military leaders in American history. And on top of all that, it is a sprightly, entertaining read." (Jon Meacham, Editor, Newsweek)

What listeners say about Andrew Jackson

By the looks of it, not many have read/listened to this book...part of the great generals series. As the reader would expect, it covers the military part of Jackson's life. It begins with his volunteer service during the American Revolution, discusses the heroic and lucky (for him) battle of New Orleans that made him famous and ends with the "First" Seminole War in 1818. The latter annexed Florida to the growing US. The battle of New Orleans made him a "rockstar" and settled once and for all, US independence from England. Jackson is the main, and really only, character in the book; other float through. Not even his wife gets much play. Upon completion, the reader understands why Jackson was the next American hero, after Washington.