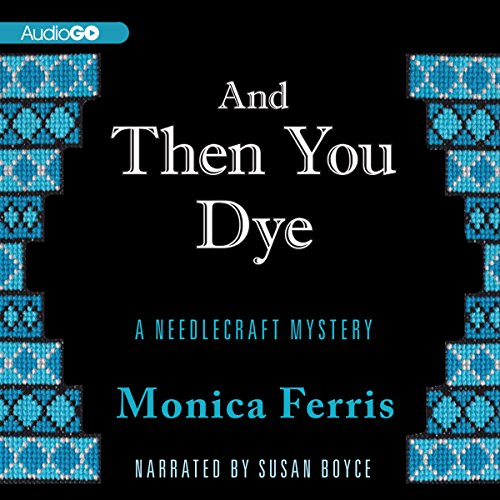 And Then You Dye

At Crewel World - the needlework shop in Excelsior, Minnesota, run by Betsy Devonshire - an array of beautifully hand-dyed yarns are supplied by Hailey Brent, an avid hand-dyer as well as a customer. But shortly after her most recent delivery of yarn, Hailey is found dead in her home, with a gunshot wound to the head.

Betsy can't imagine who might have killed Hailey, but she is determined to find out. Her investigation takes her into the world of dye stuffs and mordants and the plants that are grown to produce colors for all kinds of textiles. Fascinating stuff, indeed - except when it leads to murder.

What listeners say about And Then You Dye

At one point in the story someone mentions that it doesn't usually take months for the shop owner to solve the mystery. "Months?" I thought. "How can this have taken more than a day or two?". The culprit really is obvious from about 1/3 of the way through despite the very obvious red herrings plonked down all over the place. The amercian narrator is r.e.a.d.i.n.g .v.e.r.y. c.a.r.e.f.u.l.l.y to make sure everything can be heard but as a result sounds like she's recording an audio book for children. I chose this because I found the previous books entertaining and needed something to listen to as I was packing to leave the house but I wouldn't get another with this narrator.

And Then You Dye

Great story - Monica Ferris has done it again! The performance left a lot to be desired in my estimation. Susan Boyce put emphasis on the wrong words - used inappropriate inflections, and was, in my opinion, hard to listen to.

What disappointed you about And Then You Dye?

The mystery itself was okay, but Susan Boyce presented almost all the characters as prissy and stilted. It was as if she was reading to a kindergarten class.

I added "And Then You Dye" to my library when Audible offered it on a reduced price--and I had a $10 coupon. Why not try a mystery series I hadn't known about? If I liked it, I could start at the beginning. I knew going in that starting with # 16 in the Needlecraft Mystery series would mean I'd be getting a lot of shorthand on development of long standing characters, but I was willing to give Monica Ferris the benefit of the doubt

What was most disappointing about Monica Ferris’s story?

The story was reasonably well plotted and included a couple of digressions to flesh out secondary relationships such as those of Godwin and Rafael and Jill and Lars Larson--the sort of thing that readers of mystery series want--and miss if they're left out (like the family dinners in Donna Leon's Commissario Brunetti series).So. Points for keeping up with the major and minor characters.

What character would you cut from And Then You Dye?

And points also for incorporating a *lot* of information about handicraft dying into the plot without overloading her readers with too much detail. She uses a standard device--bring in an expert to explain the essential points about natural dyes but punctuate her delivery with additional conversation. Further, after setting us up to expect a murder based on poisonous dyes and mordants (see I paid attention), she switches to a plain old death by gunshot. But the dye-ing demonstrations are not irrelevant, as the conclusion makes clear.

However, if Susan Boyce represents the way Ferris wants her characters to sound, then I won't be going back to the beginning of the series. ]Boyce. articulates. every. single. word. and. every. sentence. on. a. falling. tone. no. matter. how. complex. it. may. be. And, although Boyce does modulate her voice in an attempt to distinguish the characters, the result is that she sounds like a sheltered first grade teacher reading to a Sunday school class. I will not be listening to any other books she narrates.Just a note: The only way I could get paragraph breaks was to type my comments into the separate boxes. As you can see, the headers don't fit the comments.

Great Story - not so great reading

This is the third book in the whole series I've listend to. The others I've read as paperbacks. This show's how much I love this series.
I don't like the narrating of Susan Boyce. She speaks kind of 'choppy' and there is no 'live' in any of the characters. Sorry to say so, but I guess the followings I will read as paperbacks again.

I really wanted to like this audiobook. I’m a crafter myself, though not a yarnsmith, and I like to see this sort of genre. But this book did not do it for me. I found the writing to be slightly repetitive and somewhat amateurish. Of course, it may have seemed that way because the narrator was not up to snuff. She frequently had some odd intonations, and often spoke unnaturally slowly, as if she had not read the book before and was not prepared. I’m not sure if I will continue with this series. At least it’s included in my membership, so no loss to me, but I would not pay money or a credit to purchase this book.

this may be one of the best of this series. I was totally baffled as to who did it. I usually get some hunch, but not with this story. Monica Ferris is such a good mystery writer! and Susan Boyle an outstanding narrator.

This is the best book in the series. Betsy is clever and tenacious. The mystery is full of twists and turns that moves the plot at a nice pace. All of Betsy's friends are included and they add to the enjoyment of the story.

I bought this book because I like "Who done its" and because I'm from Minneapolis, but I wouldn't recommend it to Mpls people, for the reader doesn't know how to pronounce the names of the suburbs. Also, beyond that, I am a knitter and thought is sounded fun. It turned out to be agony just listening to the whole thing. Her characters were incorrectly portrayed; ie.: One may have a head injury but they don't go through such a dramatic personality change. (I'm a physician). Character development was ....Where?? These people were no more intelligent enough, especially the oh so sweet protagonist, to solve a crime and it's very doubtful the police would have appreciated the woman taking over the case. Utter nonsense! I finally just skipped the second half, to the very predictable ending. Don't waste your time. Agatha Christie the author is NOT.

What was most disappointing about Monica Ferris’s story?

Best - was it reminded me of the "Cat Who" books by Lillian Braun. There was quite a bit if interesting information shared about the art of dying fabrics & yarns & also about plants. Actually I learned a lot. The story took place in a small town where people knew each other for the most part. The lives of the characters were interestingly protrayed & realistic. The twist for me came with an older female retailer becoming the amateur sleuth helping the police with the murder. The plot was kept moving & intersting but would never interest a person looking for a lot of hupla, guns, crime & violence. It was a single quite simple story but still not all that easy to solve in the beginning. The subjects of adultry, romance & gays were lightly & prudently written about. There wasnt really anything i didn't like I accepted the book for what it had & I enjoyed it.

If you’ve listened to books by Monica Ferris before, how does this one compare?

No this was the first.

Was And Then You Dye worth the listening time?

What did you love best about And Then You Dye?

What was one of the most memorable moments of And Then You Dye?

Hello, if you are going to have private secret conversations, you might want to look around and see what and who is around you. Don't just go to the back of the nursery and think because you are at the back of a business there is nothing on the other side of the fence. Duh.

It only took two sittings, as I had a slow time at work and could listen while I did computer work.

One of her best!!