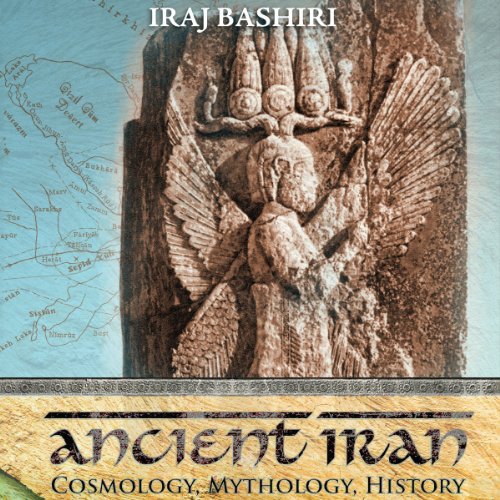 By: Iraj Bashiri
Narrated by: Mark Delgado
Try for £0.00

Ancient Iran: Cosmology, Mythology, History presents Iran's pre-Islamic history within the context of both its complex cosmology and rich mythology. The audiobook uses the concept of farr to show how authority, finding guidance in the cosmic realm, organized the lives of Iran's hero-saints in the mythic realm. It also discusses how historical monarchs organized their hierarchical societies according to the dictates of Ahura Mazda.

The audiobook is divided into three parts. The first part examines cosmology, concentrating on Ahura Mazda and the Ahuric order that emanates from him. The next section addresses mythology and describes how the rulership of hero-saints promoted the farr, culminating in the unique creed of Zoroaster. The final section tells the history of pre-Islamic Iran. It begins with a study of life on the plateau, moves on to the stages of empire and concludes with the rule of the Parthians and Sassanids.

Additionally, through a new interpretation of Firdowsi's Shahname, the volume shows how the prophet Zoroaster reorganized Mazdian cosmology to fit the ethical, philosophical, and sociological dynamics of Achaemenid and Sassanid Iran.

What listeners say about Ancient Iran

To make the theological (he called it cosmology) narration and explanation clearer and simpler. To give reference for all the rulers history, which was given as facts without supporting evidence. Less confusing new names that kept being introduced, without making emphasis on who are the main characters to concentrate on. Also, the narrator was not familiar with how to pronounce the names as we are used to call them in other history books (may be he was using Iranian way of pronunciation, but it was difficult to follow).

Another book on ancient history, but from Great Courses library.

Too quick in reading especially with many new names (some are trivial characters) and pronouncing their names in a different way than other history books do.

What character would you cut from Ancient Iran?

To shorten the theology (cosmology) and to emphasise who are the main characters in the story.