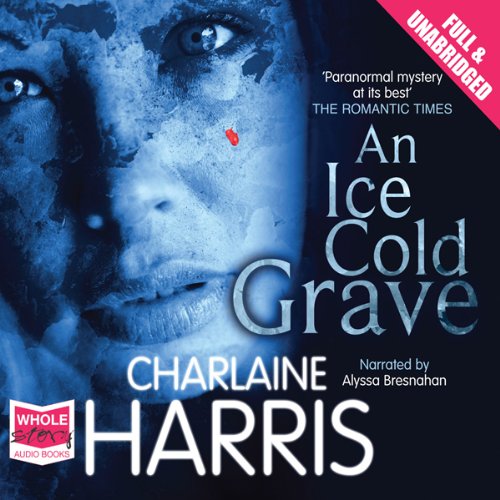 By: Charlaine Harris
Narrated by: Alyssa Bresnahan
Try for £0.00

When Harper and Tolliver are hired to find a missing grandson, they learn that several teenage boys have disappeared from Doraville. Harper soon finds the eight bodies buried in the half-frozen ground, but as she becomes part of the investigation, she learns more than she cares to about the dark mysteries and long-hidden secrets of Doraville: knowledge that could make her the next victim to end up in an ice-cold grave.

What listeners say about An Ice Cold Grave

I was surprised just how much I enjoyed this.

This is my favorite book from the series. It isn't at all what I expected from a Chalaine Harris novel after reading some of the True Blood short stories, which if I'm honest disappointed me a bit after seeing the TV series. There is nothing flashy or brash about this novel. It is primarily, a very well written detective story which has a great, although very dark plot and held my interest all the way through.

The paranormal element of the story is actually very subtle because the heroines abilities follow the extremely narrow focus of being able to locate bodies in the nearby area and give cause of death. This ability is exploited to its full potential by herself and her stepbrother/manager to provide a living for themselves but causes constant difficulties, particularly with law enforcement who either disbelieve, or do not understand the limitations of Harper's talents.

I was talking with a taxi driver the other day and he complained that they never wrote stories about ordinary people in the movies, they're all high-flying, rich and beautiful. I've noticed that unfortunately this is often the case with paranormal fiction and particularly that aimed at women. Charlaine Harris' novels break through all of this. The hero and heroine come from a mostly trailer park background and deal with a multitude of people, in this case a struggling poorer community, with a few wealthier members who have managed to collectively raise funds for Harper's services and the territorial and conflicted local sheriff.

The characterization in these novels is amazing. You'll end up liking a multitude of people despite their flaws and prejudices. While Harper and her brother have an extremely practical approach to her abilities, which often leads them to be viewed as parasites by others trying to help on the case.

I've already bought all three novels in The Harper Connolly series available on Audible UK. You do need to read them in order to avoid spoilers but although the first book in the series is not available, reading it is not necessary to enjoy the rest. The narration while not quite five star is still really good. I will defiantly be listening to this series again and would really recommend it.

great series. this is classed as book 2 in the series. audio books has brought another classic to life. if you like crime and romance it's a must

unusual story that twists and keeps you thinking. good narrator that keeps the story fresh

If you could sum up An Ice Cold Grave in three words, what would they be?

Really enjoyed this book and the performance. Very good characters and well described places and atmosphere.

What was one of the most memorable moments of An Ice Cold Grave?

Which character – as performed by Alyssa Bresnahan – was your favourite?

The main character but also the old Psychic lady

Although there are a lot of books which include these topics, murder, serial killers, police in small towns and the other supernatural stuff. I don't believe there are so many that combine these elements in such a believable and down to earth way. The characters, situations and topics, although extreme are convincing.
Alyssa Bresnahan reads in an understated, clear, rhythmic voice that never jars or distracts from the story. Great combination

Would you try another book written by Charlaine Harris or narrated by Alyssa Bresnahan?

Natural Causes: An Inspector McLean Novel, Book 1 by James Oswald [in the middle of it at the moment and it's brilliant!]

What aspect of Alyssa Bresnahan’s performance might you have changed?

Just found her voice quite irritating.

Do you think An Ice Cold Grave needs a follow-up book? Why or why not?

No, really wouldn't want to listen to any more.

The murder/crime seemed to be secondary to the romance between the narrator and her 'brother' who wasn't her brother [!]. First part ok, final part ok but the middle bit boring. Just not for me.

Would you consider the audio edition of An Ice Cold Grave to be better than the print version?

I haven't read the print version but I would after listening to the audio version.

What was one of the most memorable moments of An Ice Cold Grave?

A great read with many surprises. Well read and very entertaining.

Loved this story. Easy listerning and very entertaining. Will be impatiently waiting for any new books in audio from this author.

A great read. Full of twists and unexpected turns definiately worth a read. I could stop listening!